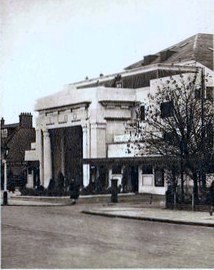 Located in the northwest London district of Golders Green. The Lido Picture House was the first Atmospheric style cinema to be built in Britain, in this case it was an Egyptian Atmospheric style. Designed by Major W.J. King, an architect who had a reputation of designing and building cinemas and then selling them on to a major chain to operate (usually the Associated British Cinemas chain(ABC)).

The Lido Picture House opened on 1st October 1928 with 2,000 seats, and was built for an independent operator, Carreras Cinemas Ltd. It was quickly sold in 1929 to Savoy Cinemas Ltd., who were to become the ABC chain. The cinema was built for cine-variety and was equipped with a fully working stage twelve feet deep with a 27 feet wide proscenium and three dressing rooms. A Christie 2Manual/8Rank theatre organ which was fixed in the orchestra pit (not on a lift) was opened by Frank Tapp. The cinema also had a cafe for the use of its patrons.

It was closed on 1st June 1957 for modernisation. Both the majestic classical Egyptian columns on the facade and the Atmospheric style auditorium were swept away in the name of modernisation by architect’s C.J. Foster (who had once been assistant to ABC’s house architect William R. Glen) and R.J. Westaway. It re-opened on 7th October 1957 with Audrey Hepburn in “War and Peace”. It also lost its original opening name; Lido and became the ABC, the first of the circuit’s cinemas to bear this new corporate name.

By the late-1960’s a new policy of patron comfort was brought in called the ‘Luxury Lounge’ which had the stalls area re-seated with 700 luxury seats, extra leg room and with new carpet laid, while the balcony was closed off to customers. This didn’t improve dwindling audiences and on 17th February 1977 the ABC showed its last film as a single screen cinema: Paul Newman in “Butch Cassidy and the Sundance Kid”. The building was converted into three screens. The old balcony was opened up using the original projection box and proscenium opening, while two cinemas were placed in the rear stalls under the balcony.

Taken over by Cannon Cinemas Ltd. in 1986, it became surplus to their requirements in the Golders Green area where they also had just acquired the nearby Ionic Cinema. The Cannon (former Lido/ABC) closed on 19th March 1987, screening “Whoops Apocalypse”, “Soulman” and “Deadly Friend”. It was demolished in December 1987 and block of residential housing for the elderly has now been built on the site.

A set of photographs of the Lido/ABC Golders Green, with original views of the exterior and auditorium showing its Egyptian/Atmospheric styles, and later views after modernisation:
View link

A vintage photograph of the Lido Picture House in 1929:
View link

I was at the last night.Very sad as it was still a very popular cinema.If it hadnt been for the fact that Cannon acquired the Classic Hendon at the same time i doubt that this cinema would have shut,at least at that time.