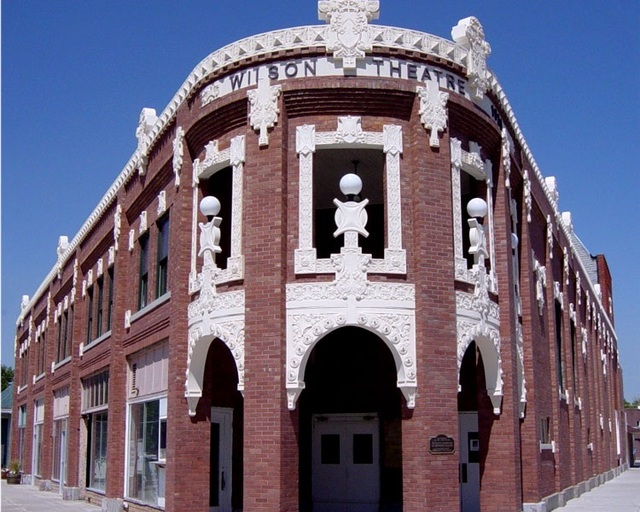 The Wilson Theatre was opened August 25, 1920, and from February 8, 1925 it was part of the Harris-Voeller Theaters chain. The Rupert City Council approved the purchase of the Wilson Theatre, which is on the National Register of Historic Places, in December of 1999.

It was estimated that it would cost $2.5 million to complete its restoration into a cultural arts center by November of 2005.

In September of 2001, a 1955 graduate of Rupert High School presented a check for $100,000 to the Wilson Theatre Renaissance Art Center which is guiding the project. Other grants have also been applied for.

In January of 2002, the original scenic stage backdrop was found in the rafters in good condition. This backdrop will also be restored. Renovation and restoration work was carried out by architectural firm Myers Anderson Architects.

This is an expanded view of the photo at the top of the page:
http://tinyurl.com/3y9aac

Here is another article about the renovation:
http://tinyurl.com/yryn9g

July, that is. Sorry.

The congressman asked for 150K to restore the theater.

Several photos and three renderings of the Wilson Theatre project can be found in this 2009 album on the Facebook site of Myers Anderson Architects, the firm that handled the renovations.

The Wilson Theatre is open with live events. Here is the official web site.