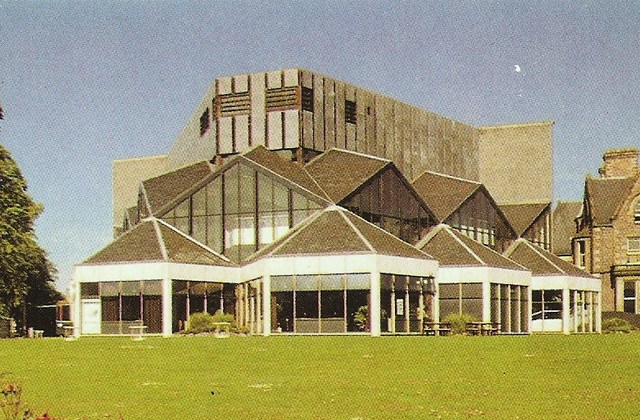 The Eden Court Theatre opened on 15th April 1976 and was designed by architects Law & James Dunbar-Naismith. Located on the banks of the River Ness, it adjoins an older building named Bishop’s Palace which dates from 1878. The new theatre contained a live theatre seating 830 and an 84 seat cinema.

In 2007, the complex was re-vamped and a new second theatre, and two cinemas were added. The Eden Court Theatre is a Listed Grade A building.

The seating capacities of the cinemas and theatres are: La Scala cinema: 138 seats; The Playhouse cinema: 86 seats; Empire theatre: 840 seats and One Touch theatre: 247 seats (223 in the stalls, 24 in the balcony).

In a nice touch, the two cinemas and the Empire theatre are named after former cinemas and a cinema/theatre that entertained the city’s inhabitants for many years. There are heritage information panels outside the auditoriums.

The two cinemas are known collectively as The Robertson Screens in commemoration of the generous donation made by the Robertson Group, the main contractor for the building of the cinemas in 2007. The two auditoriums are back to back, with a common projection room between them.