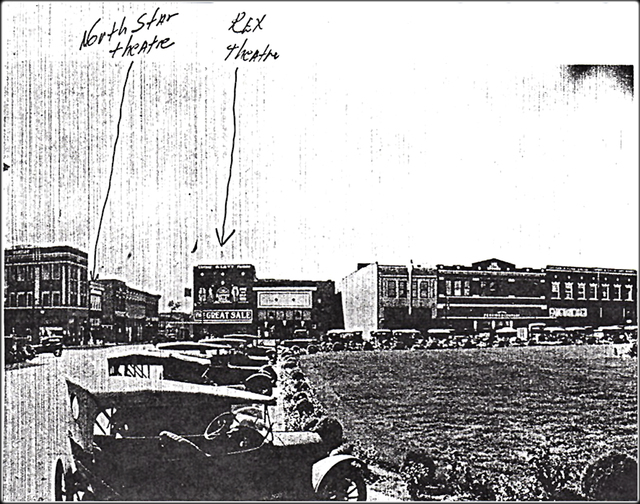 The North Star Theatre was opened January 30, 1943 by Claude Musselman in association with Interstate Circuit of Dallas. It had been built in 1941 to serve the African American community of Paris, but the opening was delayed.

It was housed in a building directly across from the Rex Theatre and was shut down January 5, 1946 when Interstate took over the much larger Alhambra Theatre. (although the North Star Theatre was still listed as ‘Open’ in the 1950 edition of Film Daily Yearbook). It was converted into retail use.

No ad for such theatre in the Paris News on newspaperarchive.com site on July 13th, 1943. can you double check the date?

Former Grand Theatre and Interstate engineer W.F. Shorthose was ready to open his new, independent 400-seat North Star Theatre Thursday, March 13, 1941. The 25' x 100' building would have all seating on the floor at open. Announced along with the unrelated Rex Theatre by Texas Consolidated Theatres Circuit, Shorthose was planning to compete with Interstate’s Dixie theatre. But in terms of optics, Texas Consolidated obviously wasn’t too happy that its new Rex just two weeks from its grand opening was across the street from the North Star. And almost magically, the day prior to the March 13th launch with the North Star ready to open, plans were abruptly postponed. Less than two weeks later Claude Musselman of Texas Consolidated Theatre said that they had taken on Shorthose’s theater including all of its contents and lease. The Rex opened without the North Star in its space. Texas Consolidated said a future date for the North Star would be forthcoming. Had you been able to buy tickets in advance for that grand opening, you would have been wise to put them in a safe place.

Not surprisingly, Texas Consolidated wasn’t in too big a hurry to open the North Star. As the opening was further delayed, Texas Consolidated’s portfolio was more clearly in Interstate Theatre Circuit Control. America entered World War II and the North Star stayed curiously ready to open yet completely unused. Nearly two years after the initial postponement of the grand opening, Interstate announced it would open the North Star, though a mere two days a week — just Fridays and Saturdays. And on January 30, 1943 the North Star finally launched with “Sherlock Homes and the Voice of Terror” — and no longer targeted as an African American theater. The wait must not have been worth it. On January 5, 1946, the theater just shy of its third anniversary is shut down following the showing of “Atlantic Flight” and its contents removed. It is quite conceivable that the Shorthose lease was a short term of just five years and Interstate packed up and left.

In early April of 1946, the North Star’s space was remodeled for Lloyd Robinson’s Home Furnishings Shop moving from elsewhere in downtown. The North Star faded without ever having much of a chance to be destination for Paris residents.

1943 grand opening ad as well as postponement announcement from 1941 in photo section.