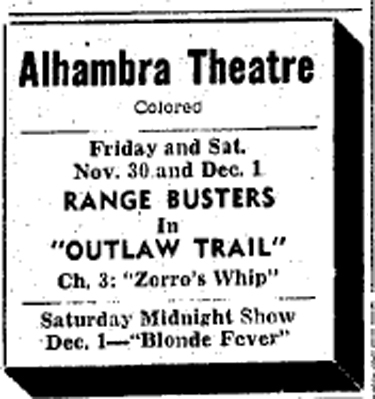 In 1945, Claude Musselman in a 50/50 deal with the Interstate Circuit purchased the big theater. Sam Ginsburg bought the showplace in 1954, but in 1955 Ola Mae Griffin (Gibbs) returned to the theater and remained for 22 years.

In 1977 a huge fire gutted the old theater. The hulk of the building remained for a few years and was later demolished.

An c. 1950 image of one side of the Alhambra’s marquee can be seen here.

Guest’s Corner at Fifth St. NE and Tudor was Paris' African American business center and entertainment night spot from WWI and through the late 1950s. And the Alhambra Theatre on East Tudor was there from the beginning. Showing movies, hosting graduations, and live shows were all a part of the Alhambra which dated back to at least 1916. The theater closed down briefly in the early 1930s before re-opening and remodeled. The theater reportedly moves within Tudor Street newly listed on December 13, 1945 at 542 E. Tudor with the grand opening film, “Gunning for Revenge.” Some of the equipment was said to have been brought over from the old theater. The new Alhambra was operated by Imogene and Terry Griffis. The final operator takes on the old Main Theatre in 1960 operating it as the Parisian Theatre, a popular run theater and closing it in 1961 after rebranding it January 5, 1961 as another African American theater. The Alhambra continued but the final date is not verified.

Actually, This Location Opened Sometime In The Early 1930s. The Earliest Information That I Can Find About It Is May 1935’s Showings And That Is It.