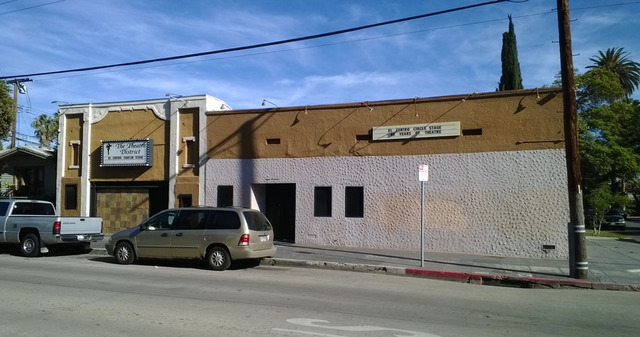 Operating as the Ivy Theatre by 1915, when it was listed as a motion picture theatre in the Los Angeles City Directory, this was one of Hollywood’s earliest movie houses. It was later converted into a garage for a mechanic. It is now a 45-seat theatre called the Chaplin Stage, and is part of the El Centro Theatre.

The history of the El Centro Theatre as a stage house began in 1946, when a group of UCLA students converted a grocery store just south of the Ivy’s former building into the Circle Theatre, as a home for their budding theatre company.

With some assistance from Charlie Chaplin, the company was a success, and later expanded into the former movie house next door, calling their second stage the New Theatre. This two-stage complex has since been the home of several small theatre groups, and one of the most significant venues of the Little Theatre movement in Southern California.

The 99-seat main stage of the El Centro Theatre remains in the former grocery store at the corner of El Centro and Waring Avenues. The current operators of the house have renamed the performance space in the former Ivy Theatre’s building the Chaplin Stage, in honor of the movie star who helped the original Circle Theatre company in its early years. The buildings have been gradually undergoing renovation for several years. It was closed around 2013.

TheatreMonkey: I forgot to mention in my previous post that it would be fun to arrange a reunion of any living members from the Circle Theater’s founding days such as Gloria Greer and William Krisel. Krisel’s e-mail address is and Greer can be reached at Palm Springs Life. They could probably put you in touch with others from that era who may still be alive such as Sam Goldwyn, Jr. etc.

TheatreMonkey: I just got off the phone w/ Bill Krisel. He was elated!! with the El Centro Theatre web site. That is his Cadillac in front of the theatre on an opening night, not Sydney’s as the caption says in one of the photos. He said Sydney bummed a ride everywhere. Those are Krisel’s letters on the facade. He cut them out of plywood and mounted them. It is Bill bending over the bucket in the photo of the gang working outside to ready the theatre for opening night. I recognized him from his WWII army photos. Krisel said all of the actors shared the work to run the theater. Krisel designed the set for “Rain” depicted in one of the photos.

He couldn’t believe I found this stuff. He had just gotten off the phone w/ Sam Goldwyn, Jr. They had just spent 45 minutes reminiscing about Sydney whose obit was in today’s Times. Sydney and Sammy were the “Bad Boys” of Blacke-Fox Academy and both hated it. He said the obit got it right that it was just a dumping ground for movie star’s kids and Sydney dropped out after 8th grade or so.

Gloria Greer, current Palm Springs TV personality and Social Life Editor for Palm Springs Life Magazine, was then known as Gloria Grant and she is on the playbill for the first play to be performed in the theater. In the third photo from the bottom left she is the woman at the bar (Sydney is the bartender). She later married a man named Jim Greer whom Bill designed two small jobs for in the early 1960s. The one-year anniversary photo has whom Bill thinks is Paulette Goddard cutting the cake, Sydney in the back and Charlie on the left. Paulette used to go out w/ the Sydney, Carlie, Jr. and Bill in Charlie’s Rolls-Royce to cruise Sunset and Beverly Hills when the boys were just teenagers.

TheatreMonkey: How does one go about obtaining Hi-Res scans of some of the photos on the El Centro theatre web site for use in Wm. Krisel’s biography? My e-mail address is .com Thank you very much.

Im so happy to hear so much more info on the theatre.

Joe, thanks for your additional information. I have some Sanford Fire Insurance maps. One from 1919 and the other from 1950.
Here are links to the files
View link
View link

John,
I glad that some of the info found has brought back some good memories. I would be happy to talk to anyone that was part of the history of the theatre. I will also make a change on our site about the caddy. All info and pictures are taken from Jerry Epstein’s book “Remembering Charlie” and the car was listed as Sydney’s from the book. We are going to have some of the images made into large prints for our lobbies. I would be happy to post a link to the high rez images when I get a chance to scan them in, probably in a few days. I also have scan of reviews and programs from a few of the first shows donr in the theatre. Ill post those as well.

I am very pleased to see this theater translate to such willing and openly creative hands as those of Mr. Roday and the masterly Shakman. My history with this theater spans a decade longer than I, as my mother produced her first Los Angeles production of a musical, “Out of the Mouths of Babes” a feminist piece while the theater was still called The Cast and her friend Ted Schmidt was still at the helm. Who do I need to contact in order to produce her last piece, How Katrina Plays at what was always her favorite little historic Hollywood theater. Blessings in advance, Mason Synclaire

Mason: Cinema Treasures is not affiliated with the El Centro Theatre. It is a web site for documenting existing and former movie theaters. I see that the Official Web Site link on our page now fetches a site with Chinese characters. As I don’t read Chinese I don’t know if the page has anything to do with the theater or not, but Yelpis listing the El Centro Theatre as closed. The Internet provides no indications of any activity at this theater for the last two years, so unless it is presenting Chinese language productions the El Centro must have closed.

My grandmother and her sister rented the Ivy Theatre for 6 months on April 17, 1916: “together with one Edison moving picture machine, 200 opera chairs , one piano, one re-wind, three carpet strips, one silver curtain, electric fixtures” , according to a contract I have between the two women and Bert Levey Circuit. I also have a playbill for two showings of “the Two Doctors”, “Fogg’s Millions”, “Fire! Fire! Fire!”, “a Female Cop”, “Snakeville’s Fire Brigade”.