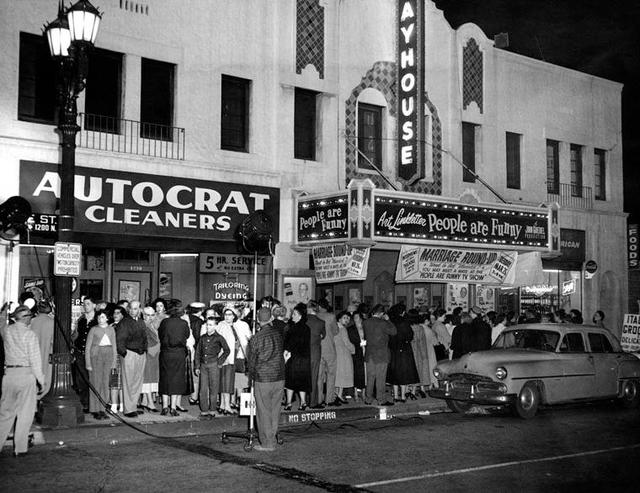 Opened as the La Mirada Theatre in March 1926. On May 9, 1928 it was taken over by West Cloast Theatres and renamed Filmarte Theatre. Later operated by Fox West Coast Theatres. This theatre was converted into a recording studio named Steve Allen Playhouse before a fire in July 1990 closed its doors for good.

The now much altered building was converted into office space and is now a mental health clinic.

David James’s book “The Most Typical Avant-Garde” says that this theater became the Filmarte in July, 1928.

Why does IMDB.com give 1615-29 North Vine Street as the address for where “The Steve Allen Westinghouse Show,” as well “The Joey Bishop Show,” “The Newlywed Game” and “The Dating Game” were recorded, and not the 1228 N. Vine St. address, formerly known as the La Mirada and Filmarte theaters, then briefly as “The Steve Allen THeater?”

Also, the venue of 1615-29 N. Vine St. is now showing as “The Ricardo Montalbán Theater,"its history noting it was once called "The Vine St. Theater,” which some sources also claim is where “The Steve Allen Westinghouse Show” and these others I mentioned were also produced.

May someone reading this please clear up this discrepancy?

Jimmo531: A history page for the Pickford Center for Motion Picture Study, which is located in a building erected in 1948 as a radio and television studio for the Don Lee-Mutual Broadcasting Company, and which later became the home of KHJ-TV (CBS channel 2) lists The Joey Bishop Show, The Newlywed Game, and The Dating Game as shows that originated from that studio, which was at 1313 N. Vine Street.

I have no idea why IMDb has these shows, or the Steve Allen show, originating from the Montalban’s address. Though it had been owned by CBS for many years, and was used as a studio for live radio broadcasts, for about three decades beginning in 1954 the house at 1615 Vine was called the Huntington Hartford Theatre, and operated primarily as a legitimate house. I don’t think it was equipped for television broadcasts as the Hartford, though it did have a projection room and ran at least one movie during that period (Long Day’s Journey Into Night, which premiered there in 1962.)

This web page has a 1963 photo of the marquee of the Steve Allen Playhouse, and even though it is a fairly tight shot, taken at night, it is definitely recognizable as the old Filmarte building, not the Huntington Hartford Theatre.

So, the logical explanation for the discrepancy is that IMDb got the address wrong not only for the Steve Allen show but for the other three shows you listed. Other Internet sources giving the same address are probably getting it from IMDb.

The fire that destroyed the Filmarte building took place in July, 1990. Here is an article about it from the Los Angeles Times.

There is no doubt that the original Filmarte theater at 1228 N. Vine was the Steve Allen Playhouse. Steve often went outside with a cameraman and remarked about the location and La Mirada Street, and the now closed Ranch Market across the street.

Steveo alluded to this. It was known as Hilliard Studio Sound Stage, for a while at least. In 1971, it hosted ‘Ye Craftsmen’s Christmas Faire & Medieval Market’ – mimes, minstrels and festivities. See photo.

In 1975, I moved into an apartment complex on La Mirada Ave, a half a block down on the same north side of the street as the Filmarte. I still live in the same complex 42 years later. When I first saw the building, it was being used as a rehearsal sound stage for major musical acts of the time. The interior of the building was sufficiently large enough for the acts to deploy their full stage tour sets and rehearse as if they were playing in a large venue. You could walk by the building and hear through the closed doors the likes of Three Dog Night and Maria Muldar; on particularly hot summer nights, the very large loading dock doors on the north side of the building were sometimes open for ventilation and, if the act didn’t try to conceal their presence by hanging light, loose drapes over the doorway, passersby could catch a glimpse of the performers.

There was a small and reputedly very high end French restaurant located at the corner of the building in the space shown as the “Autocrat Cleaners” in the photo at the top of this page. The restaurant closed suddenly and I noticed, when I passed by, an IRS seal on the door citing non-payment of taxes.

The building technically still stands. The fire (which was an event I somehow managed to sleep through) did indeed gut the interior, but the walls and most of the roof remained. The fire itself was rumored by some in this neighborhood as being possibly connected to other fires around the same period that gutted the Hollywood Ranch Market, the Ametron store next door to the Filmarte, and a few others. After the fire, the building interior was fully gutted, excavations were made to create underground parking, and the interior was rebuilt as office space. One of the casualties of the renovation was an inscription some fan(s) had made in wet cement of undying love for Donna Summer when the steps had been replaced during a previous remodeling. The building was little used after the fire and renovation and stood vacant for extended periods of time. After a time, the County of Los Angeles Dept. of Mental Health moved into the building and established a clinic, which is still functioning.

A bit of trivia: the last photo ever or Jame Dean alive was taken directly across the street from the Filmarte location.