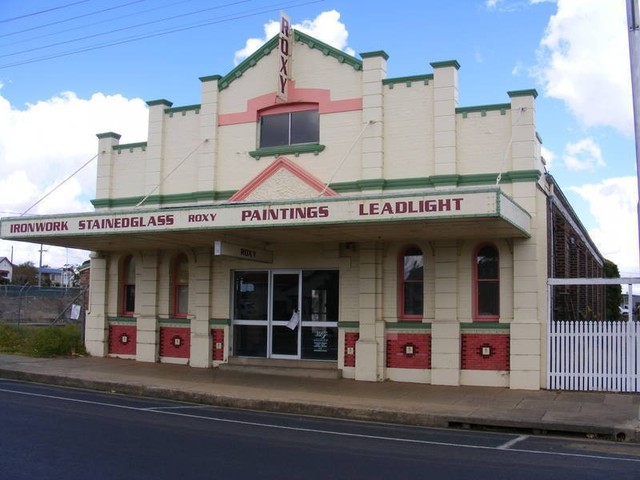 The Majestic Theatre, Glen Innes was built by J.A. Amstead to show moving pictures. The building was designed by architect F.J. Madigan and opened on 15th September 1915. On occasions it was affectionately known as Amstead’s Picture Palace. In July 1928 the business was sold to the Yardley Bros. of Sydney who advised that all existing film distribution contacts would be honoured. At the same time the lease had been obtained by the brothers for the Grand Theatre also in Glen Innes.

In September 1936 the Yardley Bros. announced a name change from Majestic Theatre to Roxy Theatre, The new Roxy Theatre, Glen Innes opened on September 24, 1936 with a complete makeover costing £3,000. His worship the Mayor Ald. A.E. Ward officially opened the refurbished theatre. The opening film was “China Seas” starring Clark Gable. The seating capacity had been increased from 627 to 700 persons. New Dunlop seating had been installed to a depth of 5 inches. The theatre entrance had been remodelled and the ticket box occupied a central position, while the proscenium featured new velvet curtains. A modern system of steam heating was a major feature. Racophone was still the preferred sound equipment and an update had taken place. The entire renovations took four months to complete.

In March 1944 the Glen Innes Examiner announced that the Yardley Bros. had sold the Roxy Theatre to Cecil H. Sully of Glen Innes. It was understood that the Grand Theatre, Glen Innes was also included in the sale. With the advent of Television, the Roxy Theatre closed in 1962. Over the years the building was used by various retailers, and finally as an art gallery in July 2008, when the Glen Innes Council voted unanimously to approve the demolition of the Roxy Theatre building and replace it with a McDonald’s restaurant, even though it was covered by a Heritage listing.

Footnote: The ABC writes - The National Trust says the Gen Innes Severn Council could have approved a new McDonald’s restaurant without sacrificing the historic Roxy Theatre. The demolition of the cinema to make way for the restaurant supporters said it would provide new jobs. The Trust executive director, John Neish, said the theatre was a significant historic landmark representative of buildings developed before 1914. Mr. Neish said the council could have worked with the company to save the historic street-scape by incorporating it into the new restaurant’s design. “I believe very much the McDonald’s could have. They are a large organisation. They’ve got very good architectural staff” he said - “If the council had pushed them harder they could have found another site or come up with a better integrated solution”.