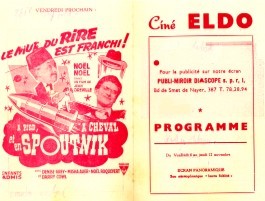 Opened very early before World War I as the Theatre du Nord, then Cinema du Nord, it became Ibis Cinema in the 1930’s.

Re-named Eldo Cinema in 1947 under the direction of Francois Degreve, it was nicely programmed, with films such as “En Cas de Malheur” with Jean Gabin and Brigitte Bardot in 1959.

It went through the 1960’s, and in the 1970’s, the programmimg changed to Karate Asiatic movies like other suburban cinemas still open at the time. It turned to screening X-Rated adult movies due to it location in the "hot quarter" of Brussels, the nearby Rue d'Aerschot. It closed in 1983, the last years of operation, the Eldo Cinema was open only 3 days a week.

Today the building is in use as a shoe store.