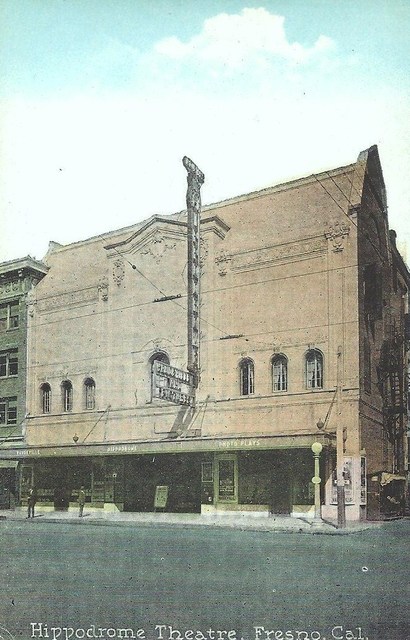 The Barton Opera House was built in 1889, opening on September 29, 1890. It was renamed Theater Fresno in around 1915, and was remodeled by 1917 and renamed Hippodrome Theatre, presenting vaudeville and screening silent movies.

A small 4 Rank 2 Manual piano console Wulitzer (Opus 315) was installed. This organ was transfered to the White Theatre on Broadway (near the Hotel Fresno) and was installed in the same manner it had been at the Barton/Hippodrome - in a stand-alone swellbox backstage. Hayes McClaran removed the organ prior to the demolition of the White Theatre. The instrument is now owned by a collector in the Bay Area.

The Hippodrome Theatre was demolished in 1927, and T&D’s State Theatre (later Fox State/Esquire/Sequoia/Towne) was built on the site, opening in 1928.

Adolph Ramish of the West Coast Theater Company, Inc., a subsidiary of Paramount Pictures Corporation, announced in Los Angeles to-day that he expects to close a lease on the Hippodrome Theater property in Fresno within a week or ten days. The deal, which Ramish says is virtually closed, will give the West Coast Company a lease which is to be followed by the expenditure of a large sum in remodeling and refitting the theater, converting it into a modern, attractive theater.

Following the announcement from Bakersfield that the Hippodrome in Fresno had been purchased came the statement from Ramish that the deal only contemplates a lease, not a sale of the property. The West Coast Theater Company now has control of 210 theaters on the Pacific Coast, its operations including the California Theater in Bakersfield, Loew’s Warfield in San Francisco, Loewâ€™s State in Los Angeles, Tivoli in San Francisco, T & D Theaters in Oakland and Berkeley, and formerly affiliated theaters in Sacramento, Stockton and Watsonville.

From the 1920s a postcard view of the Hippodrome Theatre in Fresno.

Comparing the pictures of the Barton Opera House and the postcard view of the Hippodrome, it is difficult to believe that they were the same building, but apparently was so.

The Fresno Bee article CSWalczak linked to is no longer there, but this might be it, moved to the paper’s Historical Perspectives weblog. It says that construction of the Barton Opera House began in 1889, and the house opened on September 29, 1890.

A book published in 1919, History of Fresno County, California, by Paul E. Vandor, says that the theater was leased to the Hippodrome company and converted to a vaudeville house in 1917.

The design of the Barton Opera House is attributed to Charles K. Kirby, Sr. and Charles K. Kirby, Jr. by A guide to Historic Architecture in Fresno. No clue yet to the architect of the remodeling in the 1910s.

Eugene Mathewson was actually involved in two remodeling jobs at this theater. The 1914 work on the Theater Fresno included new dressing rooms, fire escapes, a heating and ventilation system, and fireproofing. This project cost $20,000.

Mathewson was also the architect of the 1917 remodeling for the Hippodrome circuit, though on this job he was joined by San Francisco architects Weeks & Day, acting as consultants, as reported in the September issue of The Architect & Engineer of California.

This reopened as the Hippodrome on December 30th, 1917. Grand opening ad posted.