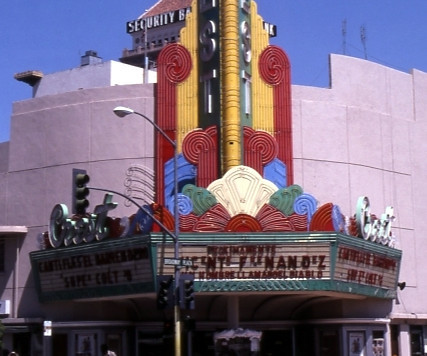 Located on the outskirts of downtown Fresno, the exterior of the former Crest Theatre is a stark Moderne style box with an exceptional marquee. It opened on July 7, 1949 and was operated by Fox West Coast Theatres. The original seating capacity was 1,284.

“The interior is very well maintained courtesy of a friendly porter, who let me inside. Although he wouldn’t turn on the lights, my flashing camera lights revealed beautifully ornate gold leaf details. Facing the stage and curtained screen you feel like sitting in a sea shell”.

The theatre later became a church, the Iglesias Universales, but as of January 2005, the church has vacated the building, and the former theatre is now rented out for concerts, movies and special events. It has a reduced seating capacity of 557.

The present CREST marquee/neon work was part of the Skouras remodel done in very early 50’s. This was a Fox West Coast Theatre/National General Theatre.

One of the nicest marquees and verticals I have ever seen.

Several fundraiser events in the works

[Photo captions: 1 of 2 Several Hollywood stars attended the opening of the Crest Theatre at Fresno Street and Broadway on July 7, 1949. 2 of 2 Lisa Dines, center, presents Dee Ann Hull and Gloria Leon with stained-glass signs for the bathrooms at Fresno’s Crest Theatre. Special to The Bee]

Sometimes revitalization happens en masse, with government money and City Council debate and a groundswell of public support – as was the case with the Fulton Mall’s conversion to Fulton Street at groundbreaking last week.

For instance, the small group of people working on The Crest Theatre restoration project. In January, theater manager Dee Ann Hull put word out on social media that the downtown theater was looking to restore its signature marquee and tower and that she needed performers and artists willing to help, even in the smallest ways.

“She was asking for artists to paint old movie posters to put up in the front of the theater,” says Lisa Dines, one local artist who answered the call. “I don’t paint, but I do stained glass.”

So, Dines created a pair of stained-glass bathroom signs for the theater. They will replace the original signs, which were put in back in 1948 and read “Ladies and Gentlemen” in green etched glass. Like many pieces of the theater, the signs had disappeared over the years.

Dines spent two months working on the stained glass, following art deco designs she found online. She wanted the signs to look as original as possible.

It was a small thing, perhaps, but it shows Dines’ appreciation for the theater and what it represents. The real estate agent and clinical counselor (stained-glass art is a hobby) has lived in Fresno for only a few years and didn’t realize the full extent of historic buildings that were in the city’s urban core. Then she visited the Crest with Hull and became enamored.

“All this. In Fresno. Who would have thought?” Dines says.

The Crest Theatre was built in 1948 and opened in 1949 as one of several ornate movie theaters downtown. It was built in the art deco style popular at the time, with ornate golden plasterwork on the walls and ceilings.

“Of particular significance is the building’s 50-foot-tall sign, which is the most elaborate example of commercial neon work in Fresno,” according to the website historicfresno.org, which has a list of buildings on the local historic register. The Crest was added in 2010.

Hull’s family has owned the 588-seat theater since 1996, when her mother, Gloria León, bought it from actors Mel Brooks and Anne Bancroft (though Brooks was not there when León signed the final paperwork, a fact she is still sad/mad about).

León is a story in and of herself. She started her first business as a child in Mexico, selling American candy and renting (yes, renting) magazines. She moved to Fresno at 15. She had owned several businesses in the Crest Theatre building before she bought it.

The Crest has remained a movie theater of sorts, hosting a series of Mexican and Indian film premieres. For a while, it was used as a church. The family works with outside promoters to bring in special events and live concerts.

León’s favorites are the EDM (electronic dance music) shows. You can often find her out on the dance floor.

So, the theater is far from shuttered. The last EDM show drew 900-plus people. But the family would like to do more events and eventually handle the promotions themselves.

But that is down the road.

“A lot of people grew up coming here. They have a connection. They see something beautiful.” — Crest Theatre manager Dee Ann Hull

For now, they’ll start with the marquee and neon, because it’s the most visible. The volunteer group is working to form a proper nonprofit (Friends of the Crest) to start raising money for the project, which Hull pegs at $250,000. After the marquee, they want to focus on a full restoration of the theater, Hull says, though that kind of project could take eight years or more.

There are several fundraiser events already in the works, including a “Peace on Earth” EDM concert April 16 and another in early May that will coincide with the city’s Historic Preservation Week.

The theater needs to be preserved, says Jason Hatwig, who sits on the city’s Historic Preservation Commission and is helping with the event, because its worth extends well beyond the obvious architecture and history.

“It’s about the people and the culture and the music,” he says. “Just to have that tie.”

Hatwig points to Sacramento’s Crest Theatre as an example of what is possible. That theater went through a complete restoration, including refurbishment of its neon sign in 2009, and is now a vibrant part of downtown Sacramento.

It won’t happen without help. Hull knows as much. She has tried working with the city and others to secure grant funding. She has had little success. She hopes, with new excitement and empowerment from the community, the theater can finally return to its former glory.

“It’s going to take a lot of work, a lot of people getting involved,” she says. “This is what we need.”

This – people willing to donate their talents, even if it’s to make a couple of bathroom signs – is how it starts.

Downtown is finally at the point we can maybe make it work.

now has 557 stadium seats please update. ps. i don’t like this news but someone has to write about it. i might go to a show there in december. finger crossed i do.

the stadium seating rumor is falls. i know because i saw home alone there yesterday for free!. they show movies every Friday. they had shown the nightmare before Christmas at 4:00 so that was a paid to see film and this was a free film. also 95% of the marquee did not light up. also original seating capacity is 1,284 please update on the film times and the original screen count

most of the neon was stolen

How very many Twentieth Century-Fox releases I saw at this theatre, circa 1955-1969: Everything from “Three Coins in the Fountain,” and “Love Is a Many-Splendored Thing,” to “Can-Can,” and “There’s No Business Like Show Business.” In its day, a real movie palace!

Fresno’s Broadway St at the time the Crest opened was a part of State Route 99 before Freeway 99 was built. All motorists driving through the Central Valley on the 99 as they went through Fresno would pass by the stunning Crest marquee. It was the most welcoming sight on the route. 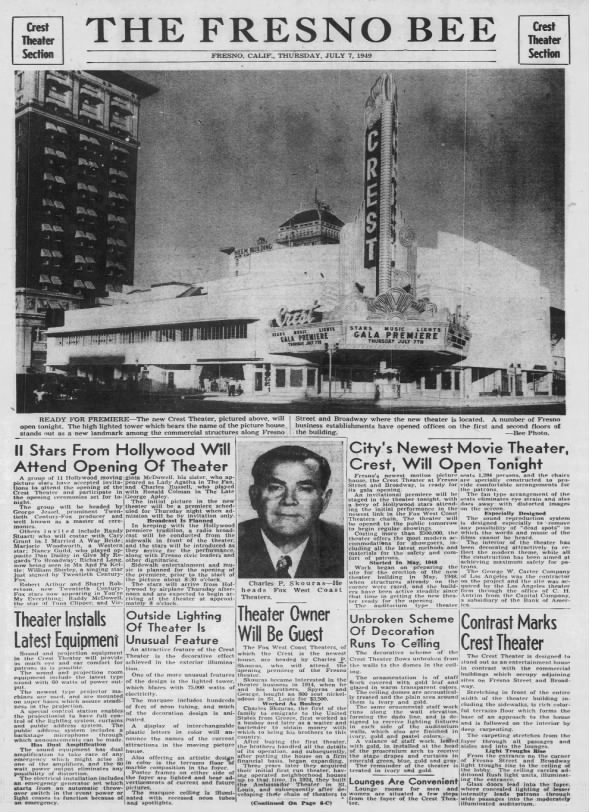