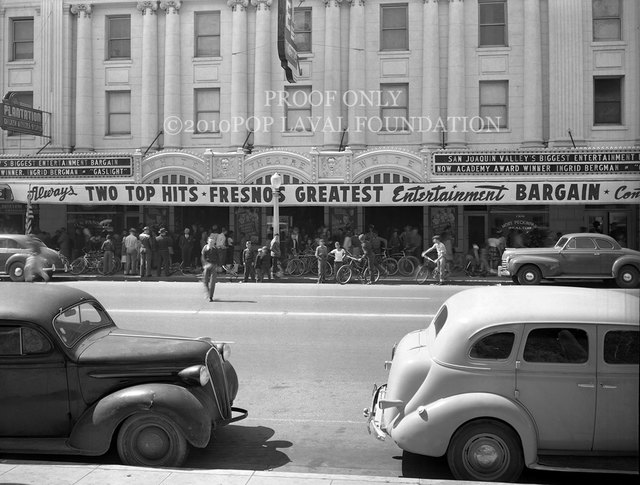 Opened in 1914, the White Theatre was one of many theatres that were once located in Fresno. By 1926 it was operating as a movie theatre. By 1965 it was screening adult movies.

Does anyone know if this theater used to be part of the Odeon-Keith circuit? I have a relative who remembers seeing Belle Baker (vaudeville star during Sophie Tucker era) perform at an Odeon theater in Fresno. I’m trying to figure out which theater that would be…if you have any idea, I’d welcome your input!

I have never heard that Odeon was ever in Fresno. The Barton Opera House was later renamed the Hippodrome. This old building was torn down and replaced in 1928 with the Sequoia/State/Towne Cinema. The Kinema Theatre was involved with the Kinema/Criterion Theatre in LA. Without looking it up, I think the Fresno Kinema opened in 1914.
One unusual facet of the Kinema was that it had a 5 manual 12 rank Robert Morton pipe organ installed in 1921.

I have never heard of the Odeon-Keith. Keith-Orpheum was a more likely name. I do not know of a Fresno theatre that was affiliated with Keith-Orpheum either. The Fresno Warnor’s Theatre was originally built as the Pantages Theatre in 1928.

Here is a November 1965 ad from the Fresno Bee Republican. It looks like they were showing adult films by that time.
http://tinyurl.com/dkhkwc

I purchased Harry F. White’s home in the Fresno Tower
district January 2009. I am interested in any other
information concerning the White Theater and Harry White
himself. I have some sales materials from the AH
Andrews Co that provided the original seating in the
theater with a letter from Harry White dated 10/23/1916.
The letterhead is as follows:
Operated in conjunction with San Francisco, Los Angeles,
Oakland, and the Orpheum circuit of theatres. There is
a lot of other information, I can scan this document if
anyone is interested but I don’t know how to post. I am wondering if anything else from the theater still exists?

Here is an extract from a biographical sketch of T. C. White in volume 2 of the 1919 “History of Fresno County, California” by Paul E. Vandor:

“Mr. White owns the corner of I and Merced Streets, 150x150 feet, 50x150 feet having been improved with a three-story building many years ago. Seeing the need for a modern theater building, and the time being ripe, he improved the balance of the lot with the New White Theater, 100x150 feet. This is one of the most modern theaters in the state, special attention having been given to ventilating, cooling, heating, safety and fire escapes. The theater has a seating capacity of 1,500, and is the largest in the Valley. The front is built four stories and is fitted up especially for the University Club, of which Mr. White is an honorary member.”

The Fresno Bee story cited by RonP in his comment of July 12, 2009, is confirmed by items published in Southwest Contractor & Manufacturer in 1914. It was Robert Boller, not Carl, who worked on the White Theatre, with Lee DeCamp, and the firm was Boller & DeCamp, not Boller Brothers. The architect who supervised construction was Edward T. Foulkes.

Robert Boller joined his older brother Carl’s firm in 1905 as an apprentice draftsman. He was then 18 years old, about half Carl’s age. In 1911, Robert moved to San Francisco to become the construction supervisor for the theaters Lee DeCamp was designing for the Sullivan & Considine vaudeville circuit. By 1914 Sullivan & Considine was on the verge of collapse, and Boller & DeCamp had begun doing other projects, such as the White Theatre. Boller returned to Kansas City in 1915, and took over operation of the Boller Brothers office there when Carl moved to Los Angeles to open a branch office in the early 1920s.

I haven’t been able to find much about Lee DeCamp on the Internet, and almost all of what I have found deals with his association with Sullivan & Considine. He maintained some association with the Bollers even after his partnership with Robert was dissolved, as I’ve found references to him supervising some Boller projects as late as the 1930s.

Of the three architects associated with the White Theatre, Edward T. Foulkes was probably the one with the most impressive training. He apprenticed in Boston with Clarence Blackall, then worked in New York City, first in the offices of Cass Gilbert and then with Carrere & Hastings. After winning a scholarship in 1903, he studied at the Ecole de Beaux-Arts in Paris, then traveled extensively not only in Britain and Europe but in the Middle East, India, China, and Japan, before establishing his office in San Francisco in 1906. He opened a Fresno office in 1910, but the White Theatre was probably among his last projects there. He returned to the Bay Area later in 1914 to work on projects associated with the Panama-Pacific Exposition of 1915, and thereafter designed many buildings in the area, especially in Oakland.

I recall seeing historic ads of Orpheum vaudeville acts at the White. Fresno was a pit stop between longer Orpheum runs in San Francisco and Los Angeles. The performers, many of them national celebreties, stayed next door at the Hotel Fresno.