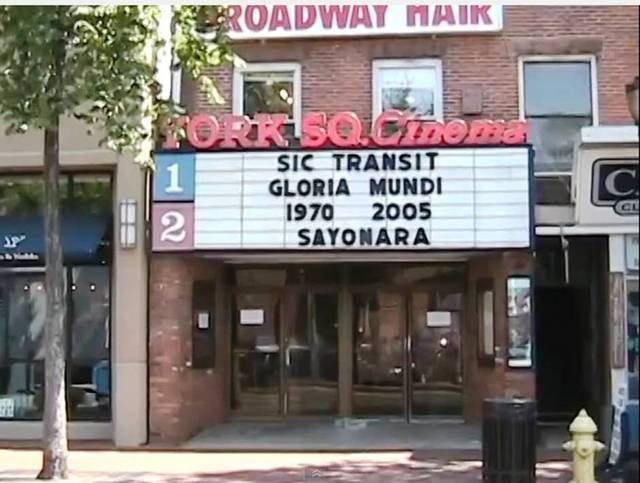 The York Square Cinema was a classic movie house located in New Haven. The original single auditorium was divided up into three screens. Located right next to the Yale campus, it showed mostly art house movies and second run films.

I think that is very cynical. I am not sure if you know Peter Spodick. But if he never believed that he was going to win, he should not have started a court case in the first place. It almost looks like he wants to justify his personal failings by appearing like a martyr.

Well, he had a point about movies being kept out of a great market. He may have had his failings but let’s not praise some certain corporations for doing a good job when in fact they aren’t.

I began and ended my patronage here with Humphrey Bogart. In the early seventies, YORK SQUARE held a Bogart festival that lasted, I believe, for 2-3 weeks and, in which they showed double-features of virtually all of Bogart’s films. This was my first visit here, and many fire-codes must’ve been broken-Every available seat was taken, there were wall-to-wall people, and even every available inch of floor space was taken! Conversely, I bid “Adieu” to YORK SQUARE with a viewing of “The Big Sleep”, and there uncountable empty seats, and a very small, relatively unenthusiastic audience. What a difference a few decades made!

Um, maybe. You should go back and see it now. You’d be changing your tune.

Sorry, well, not theatre-wise, although the former Long Wharf theatre will be moving downtown. They have Criterion Cinemas, but most of all, there’s hardly an empty storefront and the arts have been invested in heavily, but in downtown and surrounding neighborhoods.

Yeah, I was involved in the production and organizing of the last event EVER held at the Coliseum, with 5,000 people, Ralph Nader, Janine Garafolo, DL Hughley, Patti Smith, etc.

I saw Caligula here in 79. I believe it was still a single then.

a small part of me died upon reading that.

Guilford resident here (now living in Florida) and I only got to see a few films there. I remember getting to see KIDS there (though I was underage), WAITING FOR GUFFMAN and I saw my first ever ROCKY HORROR at the York and still have great memories.

Last time I was home (in 2007), my partner and I took photos all over Yale campus (he had never been there) and I told him my York Sq. memories.