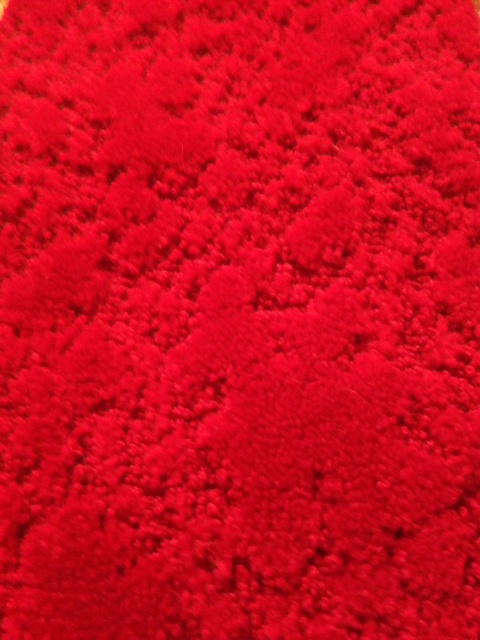 Located one door west of #500 Main Street. The Windsor Theater was constructed in 1930 by Mr. G.I. Richards, a very colorful Windsor character, who also served as the mayor and mortician. When it was constructed, Windsor’s newspaper, The Poudre Valley touted the theater as being " the first theater outside of Denver to incorporate the latest and most modern sound features and film production room." Mr. Richards sold the theater in 1946 to Ben Riggs who sold the theater two years later to R.L. "Mickey" & Ola Stanger of Frederick, Colorado. Ola Stanger was a very, very dear friend of mine. This was the Stanger’s first movie theater and over the next 60 years, they would end up owning 2 drive-ins and another indoor theater under the name of West Evans Amusements. Mickey passed away December of ‘03 and Ola passed away in June of '05.

The Stangers operated the theater until 1954, when they moved to Denver to build the West Evans Drive-In and leased the Windsor Theater to Mickey’s dad. The Stangers sold the theater in 1962. The equipment and theater was then updated although the various lessees were unable to make a profit. These lessees included Gus Meisner Ronald Lewis, Raybert Sowl, George Sims, Eugene Lenz, John Kilpatrick and Ron Montgomery.

In 1978, the theater was reopened for an 8 month period under the name of "The Four Winds Theater". Dick Bateman of Denver purchased the theater in 1979, changed the name back to Windsor Theater and remodeled the theater. The theater closed sometime in the early 1980’s and was demolished shortly thereafter by the Stark Brothers of Windsor who owned the now defunct Star Contracting. The intention was to use the site as a drive-in banking facility for the bank that was being constructed right next door to the east of the theater however this never came to pass and the empty lot is now used as a mini park with trees and a small gazebo.

Many fun events were held at the theater over the years. Spanish language features were shown weekly for the Hispanic farm workers and on the Stangers children’s (Sharon and Andrew) birthdays, the children from the school were brought to the theater on buses to watch a free movie and have a celebration.

This information was compiled by Anthony L. Hernandez, a Colorado movie theater operator/historian from the following sources: The late Ola L. Stanger, Sharon Seeley-Stanger, and Windsor Historian Mary Alice Lindblad and her book "A Walk Through Windsor"

On Google Maps, 504 shows the site of the old theater. However I have seen Google mess up their maps from time to time so it is hard to say. I’ll do some checking around and see if I cannot dig up an address. There are no buildings standing that were associated with the theater. The lot sits on the North end of the street, in between Pike’s Tires and a small building that I believe currenlty houses the offices for a handyman service. Ironically, the building that houses the latter-mentioned handyman service previously housed Star Contracting, the contractors who demolished the theater.

More notes on the Windsor Theater
The booth, at least when the Stangers owned it, was fully equipped with Motiograph equipment.
When the Stangers purchased the theater, there was an antique upright player piano in the lobby. Why I do not know since the Windsor was built for talkies. This piano is still alive and well and is now in the lobby of The Historic Park Theatre in Estes Park,Co

Chuck, do you live in Colorado? You are certainly quite knowledgeable about northern Colorado theaters yet some of your comments lead me to believe you live elsewhere…

From Boxoffice Magazine, October 13, 1945: “WINDSOR. COLO.— G.I. Richards, who entered the motion picture exhibition business here in 1912 when he took over an upstairs showcase through a mortgage, has sold the Windsor Theatre to Ben Riggs, former operator of the Antlers Hotel in Wellington, Kas..”

From Boxoffice, November 9, 1946: “WINDSOR, COLO.— R.L. Stanger of Frederick and Ted Knox of Denver are the new owners of the Windsor Theatre. They bought it from Ben Riggs and immediately closed it to install new sound and projection equipment and make other improvements. Riggs has bought a business in Sterling.”

A later issue of Boxoffice says that Riggs had bought the Windsor in September, 1945.

The February 22, 1947 issue says: “Mickey Stanger, partner in the Windsor, Windsor, Colo., has bought out his partner, Ted Knox.” And on another page of the same issue: “Ted Knox has disposed of his share of the Windsor, which he purchased last fall in partnership with R.A. Stanger. The latter’s uncle, Everett Sloan of Denver, has taken an interest in the house and will assist Stanger in the operation.”

Perhaps also of interest, the June 12, 1954, issue of Boxoffice has an article about the drive-in Stanger was building in Denver, though the article misnames it the “Evand” Drive-In. It also says it was to be the ninth drive-in built in the Denver area.

Windsor itself got a drive-in called the Valley in 1969, according to the July 21 issue of Boxoffice that year. I can’t find either of these drive-ins listed at Cinema Treasures. In fact, no drive-ins at all are listed yet for Denver.

All of this sounds correct. However during the part about Mr. Knox selling his share, there is a typo…it is R.L. Stanger rather than R.A.
Also I am not sure about the part regarding Everett Sloan. He must have been Ola’s uncle as Sloan was Ola’s mother’s maiden name and I’m not sure what he would have had to do with the theater. I will ask my friend about this next time I talk to her.
I am aware of the fact that there was a small movie house built in one of the buildings on Main Street that the Windsor Theater replaced and I believe it was on the upper level of one of the buildings but I have yet to find an address although I have a couple suspicions.

The part about Windsor’s drive-in greatly surprised me. I grew up in Windsor and visited with many of the elderly, life-long town residents and although they mentioned the indoor theater and many other businesses that had once been in the area, they never said anything about the drive-in and I also have never seen any vestige of such a thing anywhere in this small town. I will ask around and see what I come up with.

The Boxoffice item about the Valley Drive-In was only one paragraph, saying that the theater’s manager, Tom Nail, had reported the grand opening a big success, with 1703 visitors from 15 states signing the guest register, that several hundred gallons of root beer had been given away, and that there had been a drawing for prizes which included a sheepskin rug and a portable television set. Why a theater would give out a television set I don’t know.

The place might not have remained open long. I can’t find any later references to the Valley Drive-In in Boxoffice. If there’s been a lot of development in the area since 1969, odds are the site is now under some supermarket parking lot and no trace of it will be noticeable.

Oh, and the typo was mine, so Boxoffice is off the hook for that one, at least.

Well this Valley Drive-In is still a mystery. I talked to a neighbor of my parents up in windsor who is in his mid-60s and has lived in Windsor his whole life. He said that there was never a drive-in in Windsor and that he would know since he attended the others in the area frequently. The only reason there may be some doubt in his statement is because he was serving in Vietnam so he may have not noticed a drive-in that was short lived.

The reason I doubt that such a drive-in existed is due to the towns history: The town was basically built around the Great Western Sugar Company’s sugar factory in town and it was Windsor’s life blood for many years (1903-1968). When the sugar factory closed its doors in 1968 many residents and shopkeepers left and the town would continue on a downward spiral until Kodak built their plant in 1970. That said, I don’t know who in their right mind would open a drive-in theater in a town with a failing economy. 1969 was a very bad year for the town of Windsor and its people.

Nothing is impossible however and this issue certainly needs further investigation.

This is regarding the mystery of the Valley Drive-in theater in Windsor, CO. I am a native of Windsor and still live here. There was never any drive in theater in Windsor. The Valley drive in was an eating establishment similar to an A&W restaurant. It has not been opened in years and is presently a used car establishment. It is located on Main Street and is across from the Windsor Middle School. The Valley Drive in was opened by Tom Nail and his wife Donna. Donna Claus Nail was raised in Windsor. She and Tom live in the Denver area.

The Estes Park Theatre Mall that was destroyed by fire yesterday was owned by Sharon Stanger Seeley. She is the daughter of R.L. and Ola Stanger who operated our Windsor theater until 1954.

Boxoffice, Jan. 20, 1975: “Ron Montgomery will reopen the Windsor Theatre, Windsor. The house featured Spanish pictures prior to its closing about a year ago. Seating capacity now will be 300 and new carpeting and draperies have been installed. The lobby, concession stand and restrooms have been completely remodeled. Montgomery is aiming for a February opening on a one-picture-a-week basis.”

Wild news in a long article in the Dec. 15, 1975 Boxoffice. Windsor manager Ron Montgomery and assistant Pete Rioz took up 24-hour residence in the theatre on November 2 in a fight with the First National Bank of Windsor, which claimed that Montgomery owes $1,350 in rent. The bank padlocked the theatre but Montgomery sawed through the padlock and chains to get in. On advice of their attorney, Montgomery and Rioz were keeping the Windsor operating.

Since this doubles as the Valley Drive-In thread, here’s proof of its lack of screen: 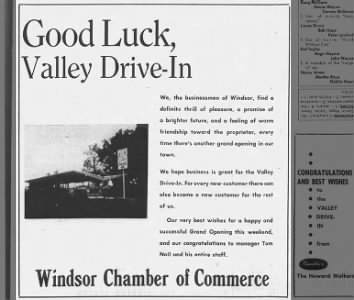