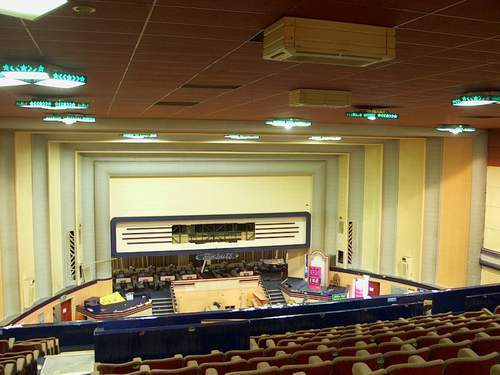 A replacement for an earlier Rialto Cinema destroyed by fire, the Rialto Cinema opened on November 25, 1935 with "Gold Diggers of 1935". It had 1,800 seats, was designed by Frederick Dyer and had a proscenium 45ft wide. The Rialto Cinema was equipped with a Compton 3Manual 5 Ranks organ, which was opened by Hal Sherwin.

The wide proscenium came in handy when CinemaScope was installed in 1955, when the opening accommodated a massive 42ft by 20ft screen.

Originally there were four tall narrow fins running up the façade and above the parapet between the windows in the central block. These have been removed to the detriment of the building.

There was a shallow stage which was used infrequently. The last film was shown on 15th October 1961 with William Holden in “The World of Suzi Wong”. The Rialto Cinema went over to bingo which it continued to be used for until its closure in 2002 as a Mecca Bingo Club. In 2003, the former Rialto Cinema was demolished to make way for a car park for a new Mecca Bingo Club nearby.

Demolition begins on 7th of April 2003, as the new bingo hall is now open next door. The site will become a car park. The building has been heavily altered inside for bingo but retained the huge proscenium and original seating in the circle.

Sadly noting remains of this impressive super cinema. It was demolished in June and the site is now a car park for the bingo hall next door.

A couple more pictures of the rialto – including the huge proscenium mentioned above by Tim:–

Here is a March 1963 poster:
http://tinyurl.com/lmzkpy

The Rialto and Clifton cinemas in York were once owned and run by Jack Prendergast, father of film composer, John Barry.

John Barry, (Barry Prendergast)persuaded his father to let him have a short stage spot on Sunday nights, he would appear with his group, later known as the John Barry 7, between the two films which were usually reruns showing for one night only as, by then, York’s Odeon and ABC Regal were taking the pick of the general release and the Rialto was becoming difficult to book with the City also boasting other, smaller but more central cinemas. The pop group soon became a draw for many teenagers who would make the “Ri” their regular Sunday night destination. At opening, the Rialto was one of the cinemas where Holophane, the decorative lighting specialists, were contracted not just for the auditorium and stage lighting but also the wall and ceiling reflective treatments and striking main curtains – all to maximise the overall effect. I vividly remember the curtains (Holophane provided identical curtains for the unrelated Capitol, Scarborough)though, by my day, much of the Holophane lighting was not being used, just open-white footlights (economy?), even so, the huge cinema was still most impressive. A mural surrounded the upper parts of the foyer walls and this depicted the Roman walls and gates, or bars, surrounding the City of York.

Built in 1909 as the New City Skating Rink, it was later renamed the Palace Skating Rink. In 1911 - now the City Roller Skating Rink - it was offered fo sale or rent, the owners claiming it would make a fine Picture Show [sic] or Billiard Saloon or both. It was described as having a fine frontage and being substantially built - the building’s dimensions were 227ft by 98ft. In 1924 it was known as the City Cinema and by 1927, the Casino. The proprietor was Lloyd Forsyth, a Folkestone based entrepreneur who had earlier advertised that he wanted to rent “a large skating rink, dance hall or very large kinema preferably in the north.” Renamed the Rialto Cinema, it was gutted by fire on 6 April 1935 with only the shell of the building left standing. Films in a fireproof box were untouched, however. It was speedily rebuilt and reopened on 25 November 1935. The proprietors during this period were Jack Prendergast (John Barry’s father) and J E Winder. In 1961 the cinema (which incorporated a large ballroom) was sold to Mecca (Dancing) Ltd who ran it as a Mecca Bingo and Social Club.