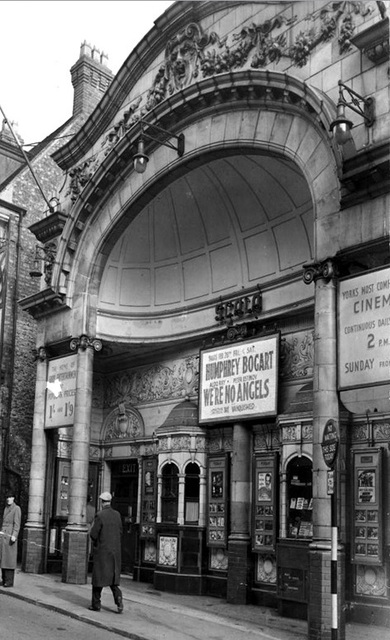 The former Electric Theatre survives as a furniture store for MacDonalds (NO burgers)!

It opened in June 1911 and was unusual in that patrons entered at the screen end of the auditorium. The pay box was outside in the centre of the arch and entrance was either side at the corners of the front.

The faiance clad exterior was restored recently and has an abundance of swags of fruit and a central Lions head. Seating was on one level.

Since 1928, it was operated by Gaumont British Cinemas and it was sold to an independent operator in 1951. It was renamed Scala Super Cinema and closed on 16th March 1957.

Inside the floor has been levelled but the plaster ceiling is intact.

In 1980, the Electric Theatre was designated a Grade II Listed building by English Heritage.

Well worth a visit if you are in York. Inside this building, it’s original origins as a cinema are very apparent.

Another photo of the frontage here:–

A picture supposedly from 1957, though the film advertised was released two years prior: View link