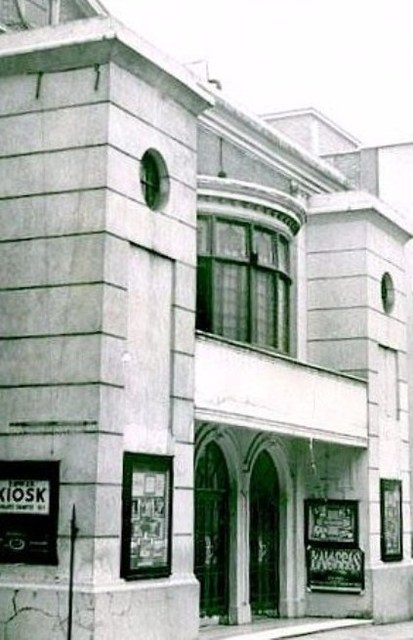 The New Street Hall was built as a Methodist Chapel. It became the first permanent cinema to operate in the city on 23rd November 1908, when it became the New Picture Palace. On 11th December 1908 it was re-named Palace of Varieties, and offered live acts and moving pictures. In 1910 it was re-named Hippodrome Theatre, and plans for alterations were proposed in May 1914 to the plans of architect F. Raney. However, it is not known if these were carried out as the Hippodrome Theatre was closed in 1914. The building was used as a hostel for troops during World War I, after which it became a salesroom, then a labour exchange.

Refurbished, it re-opened as the Tower Picture House on 10th May 1920 with “The Gentleman Rides Out” and “Charlie the Perfect Lady”. Seating was provided for 559 in the stalls and 338 in the circle. The proscenium was 38 feet wide. In 1924 it was equipped with a Fitton & Haley ‘straight’ organ which had 2 Manuals. It was equipped with a British Talking Pictures(BTP) sound system in 1930. In 1936, the organ was enlarged to a 4-Manual Binns, Fitton & Haley organ, with additions from the Regent Cinema, Hull, Christie 2 Manual/5Ranks organ which had opened in 1928.

The Tower Cinema was damaged by a German incendiary bomb on 28th April 1942, and was closed for two months while repairs were carried out. The organ was removed and broken up for spares in 1956.

The Tower Cinema was closed on 2nd July 1966 with Elvis Presley in “Frankie & Johnny” and “The Swinging Set”. The site and surrounding buildings had been sold for redevelopment as the Daveygate Arcade (which has now itself been demolished).

The incendiary bomb fell through the roof and started a fire towards the rear of the auditorium which largely destroyed the balcony. After repairs were completed, only a very few, short rows were left at the rear of the former balcony and these were above the main foyer – no part of the “overhanging” balcony was ever reinstated and the auditorium thereafter felt like a very high stadium style layout with a large “private box” set into the rear wall. The Tower was a handsome cinema internally and is still fondly remembered by older citizens for being the first cinema in York to install both CinemaScope and stereophonic sound for the City’s first run of “South Pacific” – an initial run of seven weeks in 1958 and several return runs during the ensuing years. It became the longest run of any entertainment, stage or screen, in York in a large, unsubdivided hall and it’s a run that has never been exceeded. The Tower’s owners had been quick to invest in the new screen and sound system once Rank (who owned the Odeon and Gaumont circuits and would normally have had first call on “Fox” product) refused to install stereophonic sound in all of their cinemas for “South Pacific”. This led to York’s larger and more modern Odeon being denied the initial run of what was to become one of the most successful films ever made. Rank’s large, big city “road show” cinemas like London’s Dominion and Leeds Majestic showed the film in 70mm. Todd-AO and it ran at the former for over four years – another record.
York Tower’s wide screen was set within a chamfered rectangular proscenium arch comprising three concealed lighting troughs containing amber lamps. The curtains were brown with a bold, appliqued black satin horizontal stripe near the bottom, descending step-like towards the centre and lit by red-filtered footlights. An outstanding cinema – much missed in York almost half a century after closure.