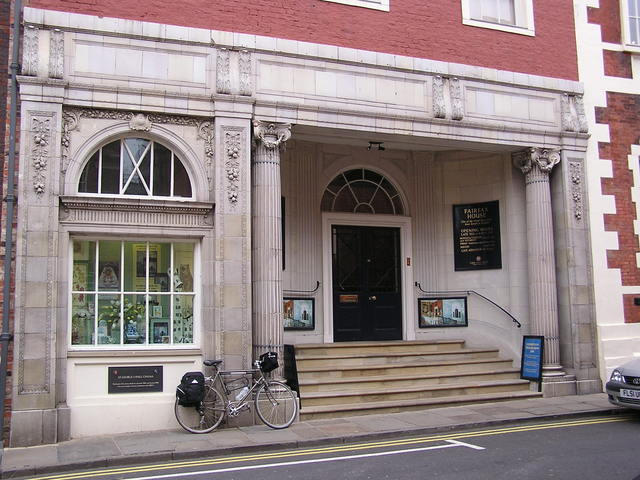 Built beside and behind Fairfax House, a Georgian house built in 1732 for Viscount Fairfax and designed by York architect John Carr. The St. Georges Hall was opened as a cinema on 7th March 1921 with “Three Men in a Boat”. Seating was provided in stalls and circle levels, with the projection box located at the rear of the stalls, under the circle. The decorative scheme included Oak wood panels on the walls.

It was taken over by the Provincial Cinematograph Theatres(PCT) chain in 1922. In 1928, a Jardin ‘straight’ 3Manual 27 stops organ was installed. The instrument had previously been installed in the Tivoli Theatre, Strand, London. It was opened by organist Frank Olsen.

In February 1929, PCT were taken over by the Gaumont British Theatres chain. The St. George’s Cinema also boasted a large ballroom and cafe, located on the first floor of Fairfax House.

The St. George’s Cinema was closed by the Rank Organisation on 6th November 1965 with Elizabeth Taylor in “Cleopatra”.

It became an auction room for several years. The auditorium was demolished in 1970, and new buildings were erected on the site. The facade and interiors of Fairfax House were retained and have been restored to their 1732 splendour.

A picture of the theatre from the 1920’s can be seen here.

A photo of the former cinema entrance in 2006 here:–

The “Hall” part of the title had been dropped by the ‘fifties and the cinema was known to one and all as the St. George’s. The heading block used for newspaper advertising showed the cinema’s name in the Gaumont house-style of lettering and a sign above the cinema entrance proclaimed “A Gaumont Theatre” in the Circuit mid-blue colour. Centrally situated and being larger and technically superior to the City’s other two cinemas with Gaumont links, (Scala/Electric and Picture House) the St. George’s enjoyed the pick of the Circuit’s films. Both the sister cinemas closed during the 'fifties and once part of Circuits Management Association, the St. George’s not only took the less appealing Rank Release product but also re-runs of the most profitable films to have appeared at the larger and superior Odeon. Sometimes films would literally transfer from the Odeon to the St. George’s overnight, “Tom Jones” was one such film – two busy weeks at the Odeon were immediately followed by a healthy week here. The Odeon would occasionally run films for a short “season” on a roadshow basis(“The Longest Day”, and “Cleopatra” for example), but these were usually no more than two weeks while some general release films would also run more than one week at the Odeon (“Mary Poppins” four weeks, Bond films two or three weeks). When the busy Odeon was thus occupied, Rank release films it would otherwise have shown played the St. George’s so that York kept up with the combined circuits’ output. A fairly ornate auditorium with barrel-vaulted ceiling, elegant pendant light fittings and much fancy plasterwork made for a pleasant place to enjoy films if slightly old fashioned and a tad narrow compared to the younger, more modern Odeon, Regal, and Rialto (not forgetting the modern suburban halls Clifton and Regent). Film presentation at the St. George’s was to a high standard; its last chief projectionist was welcoming and cheerful Mr “Johnny” Johnson whose kindness led to my first visit to a projection box as a schoolboy. The “box” was positively tiny and only just accommodated the two Gaumont Kaylee 21s, rewind bench and other necessary equipment. I was in the capacity audience at the Cinema’s closing and it was a sad and nostalgic night for many. The close relationship with York’s Odeon was emphasised, the closing film, “Cleopatra” had played the Odeon during the previous year and, in the intermission, an electric organ was played on stage by George Shepheard, the Odeon’s manager, while members of York Light Opera Company sang a selection of songs from musicals. Trivia: the screens of the Regal and St. George’s were little more than a couple of hundred yards apart and both cinemas suffered at times from flooding of the river Foss which flowed close to their “screen ends”.