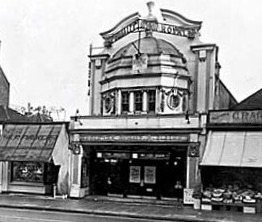 Located in the southwest London inner-city district of Brixton. The Brixton Hill Cinematograph Theatre opened on 10th March 1911, and was 13th of Montagu A. Pyke’s chain of Cinematograph Theatres to open in London and its suburbs. It had a narrow entrance on Brixton Hill and the auditorium was set well back. In 1914, after Montagu Pyke lost his cinema chain due to being imprisoned following the death of a projectionist in a fire at the Pykes Cinematograph Theatre, Charing Cross Road, London. In the 1920’s it was operating as the New Royalty.

By 1937 it was operating under the name New Royalty Kinema. In the late-1940’s it was taken over by the Birmingham based Clifton Cinemas circuit, and was re-named Clifton Cinema by 1950.

The Clifton Cinema was closed on 10th August 1957 with Guy Madison in "The Beast of Hollow Mountain" and George Montgomery in "Robbers Roost". It was converted into a camping store selling tents and other outdoor equipment. By 1993, the auditorium had been demolished, and the front entrance and foyer was in use as a restaurant. By early-2020 it was in use as a church.

Just a point out an error in the mention of it being renamed the Scala in 1914, which is incorrect, as is the mention of it ever operating under the name “Royalty Kinema” which it never did (only ever “New Royalty” or “New Royalty Kinema”). As for the front being “given a modern treatment” in 1937, it still had the original 1910 entrance doors, poster boards and looked much the same in the 1980’s as it had done when it first opened!