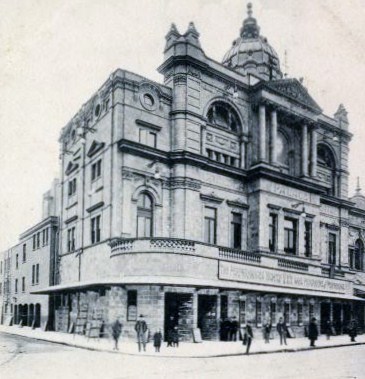 Located in the west London district of Chelsea. The Chelsea Palace of Varieties opened on 13th April 1903. Designed by noted theatre architects Wylson & Long, it had a beautiful red brick façade. The theatre was located on King’s Road at the corner of Sydney Street, across from Chelsea Town Hall.

Inside the auditorium, seating was provided for 784 in the pit, 168 in the orchestra stalls, 431 in the circle and boxes, 513 in the balcony and 628 in the gallery. The proscenium was 27 feet wide, the stage 32 feet deep and there were eight dressing rooms. The orchestra pit could accommodate 12, and there was a resident orchestra of 11 musicians. In the early days, particularly between 1910 and 1914, films were screened as part of the variety programme on the Palace Bioscope.

Built and operated by Chelsea Palace Syndicate, it was taken over in 1925 by Variety Theatres Consolidated. Among the famous artists who appeared at the theatre were: Sir George Robey, Vesta Tilley, Wee Georgie Wood, Gracie Fields and Sir Harry Lauder. In the 1930’s and through to the early-1940’s, the Chelsea Palace Theatre screened films on Sundays for one day only. This kept the building open seven days a week, as live performances were not allowed on a Sunday.

In June 1951, Sydney Bernstein’s chain of Granada Theatres took an interest in the building, and from 1955, it came under their management as a live theatre. It was re-named Granada Theatre briefly from 19th August 1957 and was closed two weeks later.

It was leased to Granada Television for use as a television studio theatre. I remember going there in 1959 to see a live broadcast of the popular TV comedy show "The Army Game" starring Bill Fraser and Alfie Bass. The theatre had been modified internally, by levelling off the orchestra stalls area to become the TV studio where the TV cameras were located. The audience sat in the circle. It was known as Granada Studio 10. By the mid-1960’s, Granada Television had moved their base to Manchester in purpose built studios, and the Chelsea Palace Theatre was shuttered. It lay empty for a short period of time and was demolished in December 1966.

A Heals furniture store was built on the site, which still operated in 2009. By 2019 it was a Metro Bank.

Here is a vintage programme from the Chelsea Palace Theatre in 1914:
http://www.arthurlloyd.co.uk/Chelsea.htm