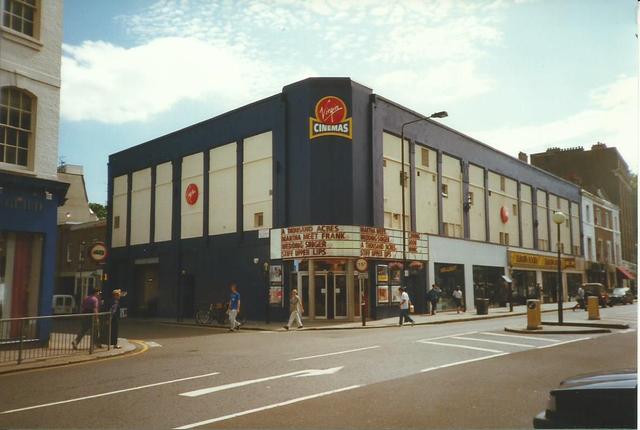 Located in the west London district of Chelsea at an area of Kings Road known as World’s End. The building was constructed and opened in 1910 as the Palaseum Rink and Picture Palace. Films were viewed from a 200 seat balcony, presumably when there was not a roller-skating session in progress. This was a short lived venture as by 1911 plans had been passed in May 1911 for architect A.W. Hudson to convert the building into a full time cinema and it re-opened on 5th October 1911 as the King’s Picture Playhouse with a seating capacity of 964.

It continued until a short closure in early-1943 when it re-opened as the Ritz Cinema, operated by Lou Morris. It was re-modelled by architect C. Edmond Wilford in 1949 and it became the Essoldo Chelsea. The original decorative façade was smoothed over and raised slightly which gave the building a plainer look.

It was modernised again in 1968 with a reduced seating capacity of 432 (the circle was abandoned) and in 1972 it became the Classic Curzon Cinema Chelsea (Classic already operated the original Classic Cinema further along Kings Road), but it closed in 1973.

The empty and rather dilapidated former cinema was converted into the King’s Road Theatre and was the perfect setting for the original record breaking run of the cult stage musical “The Rocky Horror Show” starring Tim Curry which had originally opened at the Royal Court Theatre, then transferred to the former Classic Cinema on King’s Road. It ran at the King’s Road Theatre until 1979 to packed houses and then transferred to London’s West End at the Comedy Theatre.

The building was then converted back into a cinema, now with four screens and re-named Classic 1-2-3-4 Chelsea (the other Classic Cinema on Kings Road had closed) from April 1980, nothing remained of the original interior decoration. It has continued under further management take-overs as the Cannon, MGM, Virgin and most recently UGC Chelsea until the July 2005 takeover by Cineworld UK.

In December 2012, plans were announced to close and demolish the Cineworld to build a new Everyman Cinema on the site, but the planning application was refused. The Cineworld closed on 9th March 2017 and demolition began in early-2018 and was completed in April 2018.

A new Everyman Cinema was built on the site which opened on 24th July 2020 (It has its own page on Cinema Treasures).

So it’s finally closed, with little fanfare. No message on the readograph, just a backlit poster outside and one or two inside plus film time screens occasionally showed a “That’s all folks” slide.

All food and drink was 25% off with no fountain drinks available at the lower kiosk and no hot dogs at the upper kiosk (I bought a popcorn combo so had to take my receipt upstairs – Coke Zero had run out so I settled on a Diet Coke which turned out to be almost flat).

One slide before the film advising the cinema was closing today and inviting customers to use Fulham Road or Leicester Square – perhaps rather telling that there was no mention of Haymarket? Once that goes then that’s all elements of ex-Classic cinemas gone from the Cineworld gene pool.

A few customers chatting to staff about what happens to them (employment at other sites) and thanking them.

A gallery of the cinema on its final day of service, including screens, AV and staff areas.

end of an era. How long till it gets pulled down and rebuilt as The Everyman?

Thanks Billy, for the great final gallery. Sad to see it go (forgot how good the two main screens were) and it has the distinction for me of being one of only two places in London where I actually watched a firm in an otherwise empty cinema – a Screen 4 showing of “Daddy’s Dyin, Whose Got The Will” starring Dolly Parton, many years ago.

A rare photo of the cinema as an MGM: https://rbkclocalstudies.files.wordpress.com/2017/08/kings-road-south-side-mgm-cinema.jpg

Demolition began in early 2018 and the site has now been mostly cleared. A photo has been uploaded from April this year.

Passed the cleared site this week, no indication of whether the building eventually going up in its place will contain the earlier-mooted Everyman Cinema. We will have to wait and see.

Update : passed the site on Friday last (08/03/19) and there has been much progress – the replacement building is in an advanced state of construction and if matters continue to move forward at this pace, it should not be long before we know for certain whether or not a replacement cinema is definitely part of the build. A short distance away, the Curzon Chelsea is undergoing demolition, but it is known for certain that a replacement ‘state-of-the-art’ cinema will definitely be present when the building is ready to re-open in exactly three years' time – if on schedule, of course.

Everyman Chelsea signage already up at the construction site!