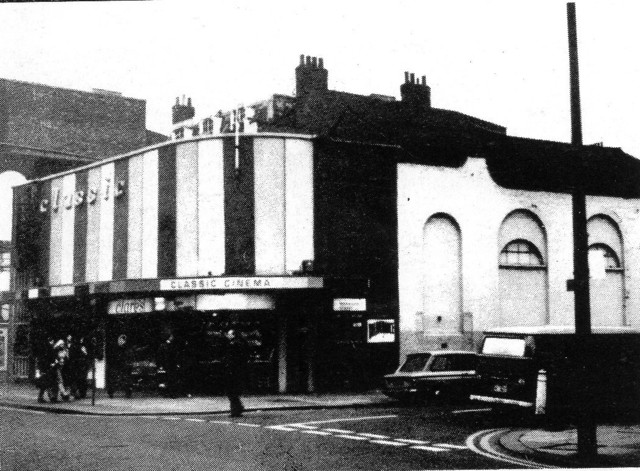 Locating the west London district of Chelsea. Opened in 1910 as the Chelsea Picture Playhouse, the architect was Felix Joubert and seating was provided for 394 on a single floor. In the early-1920’s it was known as the Electric Cinema Theatre and had this name set into the tiled facade.

By 1937 it had been taken over by Classic Cinemas Ltd. and became one of the first to be operated by this chain that specialised in repertory screenings of classic Hollywood films. It was re-named the Classic Cinema and by 1953 it was operated by Lou Morris, retaining the Classic name, but by 1958 it had been taken back by Classic Cinemas. The facade was reduced in height and given a ‘modern’ look which it retained until closing on 4th August 1973. A typical ‘Classic’ double bill programme of Edward G. Robinson starring in two films, “Little Ceasar” and “Bullets or Ballots” were the final films.

The original stage production of “Rocky Horror Show” starring Tim Curry was transfered from the Royal Court Theatre to the Classic Cinema building for three months. After that, it went onto greater success at the slightly larger King’s Road Theatre along the road, and later into the West End at the Comedy Theatre.

After the short run of “Rocky Horror Show” ended, the building was demolished. Today a branch of Boots the chemist’s shop and offices have been built on the site.

I might not be here if it wasn’t for this building, my late Father Patrick Mullen was Assistant Manager and later manager in the early sixties and my mother a Drama Student worked as an usherette. They met at work and married soon after. It’s no wonder I have an intrest in cinemas!
This was quite a popular cinema in those days and my mother recalls many actors including Alec Guinness and would call in to watch films unnoticed by the public.

Isnt this the Classic cinema where The Rocky Horror Show played for awhile after premiering at the Royal Court up the road before it went to the West Ends Comedy Theatre??

Hey jason, thanks for that! I had a pretty good idea it was this one but as there are so many old cinemas in Chelsea i just wanted to make sure. I saw Rocky when it went to the West End but i know a few people who saw it at the Classic. They said it was amazing it was ever allowed to open cos the ceiling was comeing down, wallpaper falling on the audience- how very atmospheric for Rocky! The show lost all its raw fun when it went to the 800+ Comedy, but at least it had a good few years in the West End. Great to be in touch with you on this amazing site

A vintage photograph of the Classic Chelsea in 1967 ‘Swinging London’:
View link

Hi Jason,
I am looking for an Assistant Manager of the classic cinema Chelsea called Daniel. He worked there about 1965/66. The Manager at the time was called Peter Lucas. He is related to my husband. Any ideas? Thanks Claudia

Just a couple of historical corrections to the information on this listing, as I think the contributor, or rather the original source from which the information has simply been copied/recycled, has confused the early details of the building with those of the other cinema building in Chelsea that also later became a Classic following the circuits takeover of the Essoldo chain. I can, however, confirm that this cinema did not open in 1910, and its architect was not Felix Joubert referred to. Neither was its original name the “Chelsea Picture Playhouse” as stated (it did however have a couple of additional names not mentioned here).

I lived in Paultons Square in 1973 (1962-1984) The last night showing was The Great Escape to a packed house. Then the R.H. moved in for what was to be one month Still on the Road. From the Classic it moved to the Elsoldo , Church St x Kings Road for years and years.

In December 1979 I went to the Rocky Horror Show ( stage production). I feel sure that it was performed at the Chelsea Hippodrome not the Classic . Later the Hippodrome closed and became the Habitat on Kings Road.

The old Chelsea Classic received the first transfer of Rocky Horror from The Royal Court Upstairs in Sloane Sq. It then moved down the road to what is now Cineworld Chelsea (known briefly as The Kings Road Theatre before bing divided as a cinema) then ending its run at the Comedy Theatre, in Panton Street off Leicester Sq in around 1980-81 (now the Harold Pinter) The former Odeon built in 1930’s now Habitat and Curzon Chelsea never staged it. The only other theatre on Kings Road The Chelsea Palace was a TV studio for Granada TV but didn’t stage the show at anytime. That is now redeveloped as shops, currently the Metro Bank.