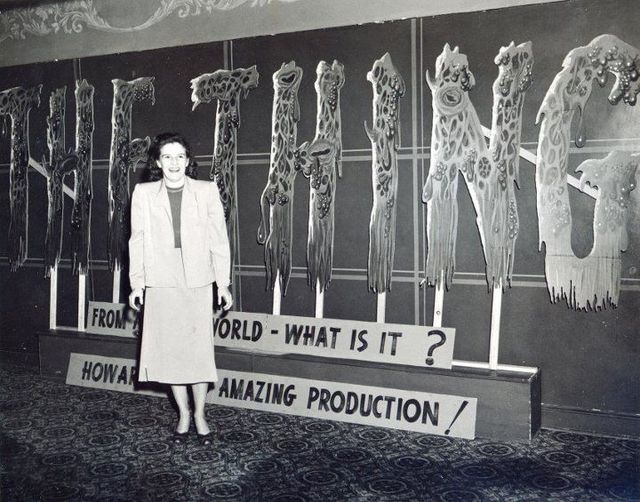 The 900-seat Capitol Theatre was located across the street from the Strand Theatre. It was opened on February 21, 1927 with Pat O'Malley in “The Midnight Sun”. In the 1940’s was operated by Paramount Pictures Inc. through their subsidiary H.F. Kincey. It was still open in 1977. The building is now occupied by a Family Dollar Store.

The photo is not accurate. This Google photo is from South Main Street in Danville. The Capital was adjacent to the Hotel Danville in the 600 block of downtown Danville. The Hotel still stands as Danville House, an apartment building for disabled folks.

The Capitol Theater was built as part of the Hotel Danville complex at 600 Main St. The blueprints list the seating capacity as 850 people. The balcony was accessed via the hotel lobby and it had its own separate lounge and bar upstairs ( lobby level) according to the blueprints as well. The theater was in operation before the hotel opened. The earliest theater advertisement dates to March 1927. The hotel was under construction as of June 1926, opening July 19, 1927. The Capitol was in competition for the same patrons with the Broadway Theater which reopened in 1921 after being rebuilt because of a fire.

The Capitol Theatre was first operated by R.C. Frost, who had a wife and two children originated from Tampa, Florida. They moved to Danville a day prior to the Capitol’s grand opening.

The Capitol Theatre opened its doors to the public on February 21, 1927 with Pat O'Malley in “The Midnight Sun” along with an unnamed comedy and a newsreel. The Capitol’s original capacity is listed as 900.

R.C. Frost was formerly a member of the Chamber of Commerce and the Rotary Club, who was also actively interested in a Boy Scout movement. Since before World War I, Frost is a showman for years, having been operated theaters for Southern Enterprises, a S.A. Lynch operated organization and chain from Tampa, Florida and Dallas, Texas. However, his service was interrupted right when World War I struck the United States. It happened twice. Once when he secured to take his place in the combat division of the flying service in France, and again when he resigned to handle the state of Florida’s realty during the recent boom in the Peninsula State. Frost is a World War I veteran who survived the attacks, as he carries honorable of his service even after a bullet struck him in the leg, patched upper lip, and a long scalp wound securing in a skirmish with the Hun while at 5000ft in the air. His comrades replied that his laws of chance did not operate when he fell 5000ft and came out with his life intact. He was called “Luck Spot” since then. Frost has been in Danville since 1926.

However, after just more than 10 months, the theater immediately closed its doors on December 31, 1927 after reports of a merger of the Tribute Theatres Corporation and the Southern Amusement Company which was in course of negotiation but whether the closing of the Capitol is not indicated as a result of its development. From its opening in February until closing in December, it has been reported that the theater patronage provided a fair return on the investments. The cost of films and that of operating a more modern theater is considerably larger than it previously used. This left Danville with three other theaters by Southern, which were the Rialto, Broadway, and Majestic Theatres.

The Capitol Theatre those had a huge surprising return after more than a year as a vacant building under the leadership of Frank Garner, including former Rialto organist Harold Price who moved to the Capitol shortly right after the Rialto Theatre received sound on February 5, 1929. The Rialto is the first theater to install sound in Danville, which the installation of Western Electric.

The Capitol Theatre reopened its doors on February 11, 1929 with Colleen Moore in “Synthetic Sin” along with a performance by Garner’s own orchestra, Price’s own organ who also sings as well, an Our Gang short in “Growing Pains”, and a newsreel. Sound would later install at the Capitol later on.

The Capitol would later gain its strength as Danville’s dominant mainstream theater. The Capitol operated throughout World War II and into the Korean War era.

The Capitol was the first in Danville to receive CinemaScope as announced on January 5, 1954, and ran its first CinemaScope film “The Robe” on February 4, 1954.

Its first-run mainstream success continues into the 1960s and the first quarter of the 1970s. But on December 2, 1971, an announcement from Danville’s The Bee announces that the Capitol would temporarily close on December 4, 1971 (with Charlton Heston in “The Omega Man”) according to manager Paul Jones from the nearby ABC Southeastern operated Riverside Theatre. However, it was announced that there is a possibly of reopening by new management after its operation by Clements & Parker.

However, after closing throughout 1972 and most of 1973, the Capitol made a surprise fanfare and was refurbished by R-C Theatres of Fredericksburg. The Capitol reopened its doors on November 21, 1973 with “Cleopatra Jones”.

There were a handle of robberies in Danville throughout October 1976, one in case was the Capitol Theatre on October 3, 1976 when $4 was stolen from the cash register and entry was made by climbing the fire escape and prying open one of the doors.

The Capitol was still in operation as late as 1977, but its closing date hasn’t been found yet.