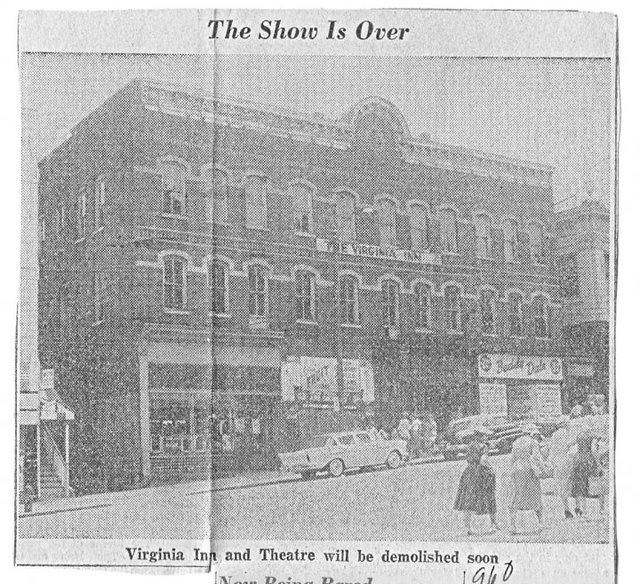 This started life in the mid-1880’s as the Danville Opera House and was also called the Academy of Music. It was one the first theaters located in Danville. In 1883 during a Democratic convention held in the theater, a race riot took place just in front of the theater across the street at the old post office. The riot lasted briefly and ended with a number of deaths. The riot later became known as ‘The Riot of 1883’.

The theater was three stories and on top of the theater was located the Virginia Inn, a hotel that was mainly used for the performers at the theater. The theater had two balconies and sixteen opera boxes, eight on each side. It was renamed the Majestic Theater sometime in the early-1900’s and later became the Virginia Theater around the 1930’s. The theater was converted to a movie house with the outbreak of motion pictures. At the end of its life, the Virginia Theater showed mainly western movies and the auditorium was demolished in the early-1960’s due to structural issues. The theater auditorium space became the site of a parking lot for city employees and a law office, with only the original brick foundation remaining and a mass of steel that was once the staircase that led to the projection booth..

All that remains is the first floor of the building that houses a few shops. The original entrance to the lobby was long and narrow and is now occupied by a barber shop.

Camillia Williams, a native of Danville, and Geraldine Farrar performed on the stage at the Virginia. Camillia Williams was born in Danville in 1920 and made her New York operatic debut in 1946, singing the title role in Puccini’s Madame Butterfly.

There has to be few cities in the nation with so little left of the theatrical heritage.Downtown Danville sits,a sad monument to our desire for cheap chinese products.It’s only going to get worse.The furniture and fabric industries continue to disappear by the minute.Wake up.I could name a large list of cities in VA,NC,SC and a few others that I travel in that have closed or destroyed theaters that can be attributed to our lack of desire to buy American products.A short list would be Pulaski,Martinsville,Burlington,Henderson,Greensboro,Roanoke,Emporia,Roanoke Rapids,S.Boston,Suffolk,Lynchburg,etc.

I just looked on the map to see where Danville was and um, I don’t want to offend anyone, but it appears to be in the middle of nowhere! How did this area sustain 20,000 theater seats?! I realize that in the end, it didn’t, but at one point it must have been fairly successful to encourage the amount of theater buliding noted in the intro above. Anyone have an answer?

If you add up the total seating capacities of all seven theatres operating in Danville in the 1950 Film Daily Yearbook, they total 4,159! The Virginia Theatre at that year is listed with a seating capacity of 629, a reduction from the 700 figure given in the 1940’s.

Here is part of a July 1976 article in the Danville Register:

In 1946 here’s what one would have seen on a stroll down Main St. The Alice Burton Home, the W.W. Williamson residence and the residence and offices of Dr. C.T. Carter stood where now stands First Federal Savings and Loan and the bus station. The Greyhound bus station, the Danville YMCA and the residence and offices of Dr. C.W. Pritchett â€" once headquarters for the Danville Chamber of Commerce â€" all gave way for the American National Bank headquarters at the corner of N. Ridge and Main Streets.

The Clark Terrace apartments stood at the present site of Lockerman Optical Co. and Wyatt Buick Co. was based in the building now occupied by Byrd Business forms. The offices of Dr. Luther Robertson and Dr. John Tyree were in a pre-Civil War building now razed and presently the site of Rippe’s and a Virginia ABC Store.

The Virginia Theater and the Virginia Inn, a structure with a long history, occupied the building now housing Beaver Optical Co., the News Center, The Children’s Shoppe and a beauty salon. There now is one motion picture theater downtown.

Across the street the Stonewall Hotel, the GSK restaurant and the Security Bank and Trust Co. occupied land now the site of the Bank of Virginia-Danville.

Robert, did you find any information about the Schoolfield Theater? I have a photograph of it.

The Virginia Theater / Danville Opera House had a seating capacity of around 1200 people. In later years the opera boxes and sections of the upper balcony were closed off – accounting for the reduced seating. The Danville Public Library has a B/W video of Danville from the 1920’s showing the interior of the theater.

The 1913 edition of the Cahn guide lists the Majestic Theatre in Danville with a total of 1,101 seats, of which 426 were on the main floor and 275 in the balcony. Closing the 366-seat gallery and the boxes with their collective 40 seats would have reduced capacity to 701.

In the unlikely event that Donboss is still checking this page, the Schoolfield Theatre has a Cinema Treasures page here. Very little is known about it, though.

@ Joe- that sounds about right / I knew the seating was over 1,000 and not over 1,200. I have a silent film of the inside of the theater showing the interior.

Roy Rogers came to the Virginia with his horse Trigger. While in Danville, Roy also rode Trigger up the courthouse steps and on the Virginia stage. Tom Mix also came to town and rode his horse on stage.