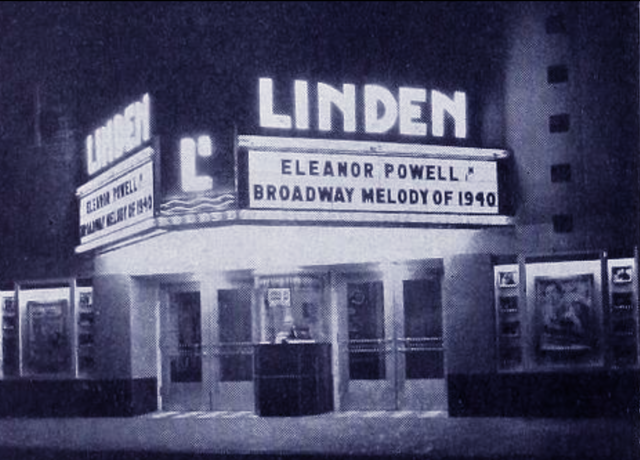 Opened July 19, 1940 as the Linden Theatre with a seating capacity of 449. It kept that name until at least 1950, then later became the Grand Theatre.

It later became the Village Cinema ‘N Draft House. It was still open in the early 1980’s but has since closed and is now for sale by the owner. I couldn’t find when the theatre first opened but you can tell from the style of the building that it has been around since at least the 1950’s.

The Linden theater was the name until the 1970’s when it became the Cine Malibu. Near the end of its life it became the Village but I think the final name was as the Grand theater in the early 1990’s. I was at the closing by chance. My wife and I had gone there to see a film and were standing in a very small line waiting for them to open up but the ticket gal came out and announced that the theater was closed! That was it. I saw many, many films there often times thanks to free passes from the Journal News for delivering papers. A fine neighborhood theater (the neighborhood it is located in is known as Lindenwald, hence the original name).

Wonder what they charged for a beer it had to be very high with concession mark ups.

As a old movie buff and someone who attended the old Linden Theater,I did some research using the back issues of the Hamilton Journal News. My father, who was a reporter there for 23 years, acquired the bound volumes after they were discanded when the newspaper went to micofilming their archives. I looked through the bound volumes of 1946-1944 when I found that the first ads for the Linden were printed in 1944.They didn’t run as many as the Palace or the Rialto, usually small block ads. I went there in 1953-54, while I was living in Lindenwald. Admission was about $.11. While they did not run the B westerns and serialsw, which had pretty much gone to television re-runs, they did run Ma and Paw Kettle, sci-movies, Francis the Mule. In 1968, the theater was taken over by new management, new seats were put in and the floors were given a good cleaning since they were sticky over years of spilled pop and Ju-Ju Drops. The new name was Cinema Malibu and the first film I saw there was the R rated version ofr “Candy.” It was later changed to the Village Cinema with the backrow widened to allow tables so that the patrons could enjoy a glass of beer or wine. It became like a art movie house. The house shown in part in the photo you post was originally the home of my great uncle James Newton, for whom my father was named. He operated a fruit and vegatable market there in the late Forties. After he died, the Cearly family bought it and kept it as a fruit market until they opened a new business selling soft dough pretzels. These were sold uptown on Saturday’s market day, the Butler County Fair and at the racetrack. That business is now closed but the owner’s wife still resides in the house at age 95. Hope this answers all your questions.
y