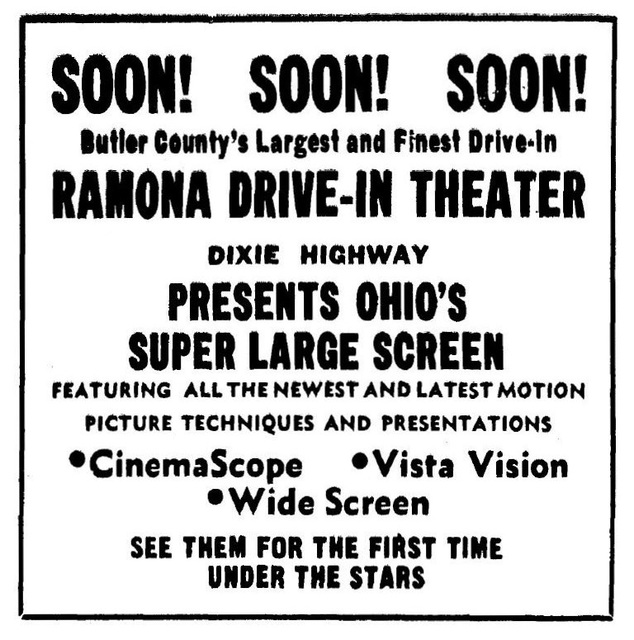 The Ramona Drive-In opened on May 26, 1950, featuring the 1950 action film “Montana” with Errol Flynn and Alexis Smith. It was opened by George Turlukis with a parking ramp that could 800 cars, along with a 64 ft. x 66 ft. high screen tower. It featured a 20 ft. x 40 ft. stage for shows that included dressing rooms in the base of the screen tower. In October of 1954, a 124 ft. x 62 ft. CinemaScope screen was installed. The drive-in was built at a cost of $185,000. Future plans call for television sets to be installed in the concession stand for family members who have a favorite TV program they want to watch. Also, plans called for a swimming pool which will be available as an ice skating rink in the wintertime. Later on in 1955, Turlukis would build and operate the Valley Drive-In also.

From 1962 to 1966 Associated Theatres, Cleveland, Ohio, was the buying and booking agency. I think they might have been operating both the Valley Drive-In and Ramona Drive-In also during this time period. The Ramona Drive-In closed in 1966 at the end of the season. The property was sold for the construction of new a S. S. Kresge Store and other retail outlets.

wow, televisions at the concession area. that is different lol