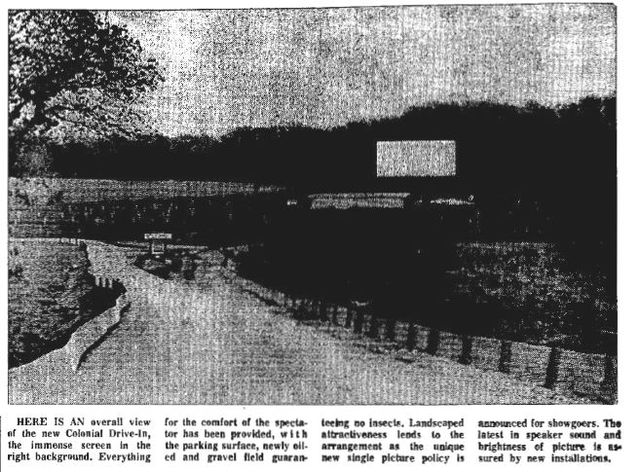 The Riverview Drive-In opened on December 7, 1956, featuring the 1954 western “Silver Lode” with John Wayne, Lizabeth Scott and Dan Duryea. The second feature was the 1955 drama “The Racers” with Kirk Douglas, Cesar Romero and Lee J. Cobb. It was opened by William A. Fraley Sr. and Richard Logsdon using the business name of Riverview Drive-In and Amusement Co. Inc. The theater had a car capacity of 400 cars. It was built on low land beside the Great Miami River. I wonder if they ever had a flooding problems? On October 19, 1966, Holiday Amusements Co. (Ben Cohen) bought the Riverview Drive-In. The drive-in was completely rebuilt with new equipment and improvements.

It reopened on May 17, 1967, as the Colonial Drive-In. Opening day features were “How to Succeed in Business without Really Trying” and a featurette starring Herb Alpert and his Tijuana Brass. Holiday Amusements would be operating all the drive-in theatres in the Hamilton, Ohio, area at this time. Ben Cohen, President of Holiday Amusements Company died at the early age of 57 in May of 1974. The Acme Drive-In, Holiday Drive-In and Colonial Drive-In continued operating until the end of the 1987 drive-in season when they all closed for good. The property was sold in May of 1996. Part of the drive-in was demolished except for the screen tower which is still standing. The property now has some construction equipment on it.