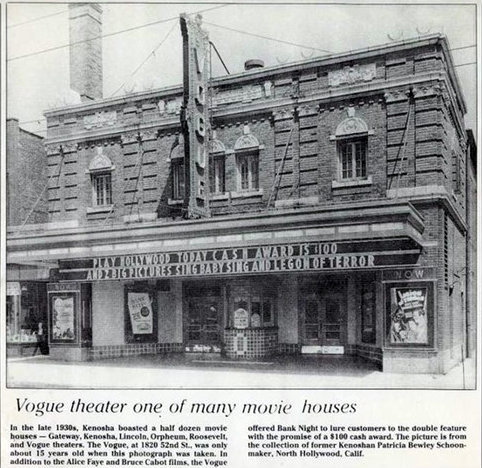 The New Vogue Theatre in Kenosha was opened in September 1923 with Joe King in “Counterfeit Love”. Originally it had vaudeville acts and movies. But in 1958, the the Vogue Theatre was purchased by a local religious group.

In 1960, the original marquee (which was fantastic!) was removed for the widening of 52nd Street. That same year, the theatre was loaned out to the Shoreliners Drum and Bugle Corps, who then had all the children who were in the corps tear out the theatre’s seats and level off its floor with cement. But they did install a kitchen. In 1970, a group of college kids restored the box office, brought in a bunch of folding chairs, and started showing 16mm films.

“In 1977, Louis Rugani (who has a show on 920 AM in Kenosha) helped my father attain the building. He had built a loft on the balcony to live in and had it as a gymnastics academy during the day and a disco at night, and special nights for roller disco too.

there were 650 seats(or so they say)-the architect was charles augustine-at times it was leased under the united theaters chain-the style of the interior was modest. floral print fabric walls, the lower part trimmed to resemble stone, a few upright pilasters, and double-candle light sconces of plaster with small shades. unfortunately, by the time it fell into my family’s hands nothing of the interior survived.

denise be sure to submit us news on the renovation! Also I have changed the name to La Vogue Theatre, since that will be the name once you restore it. Once again thanks for you help.

The Vogue Theatre opened in September 1923 and was operated by local barkeep Walter Schlager. It hosted second-run films and live acts into the 1930s. A random search turned up an appearance by Patsy Montana. There was a two-manual Wicks organ. Local exhibitor Bill Exton (who also operated the Roosevelt and Hollywood Theaters) leased the Vogue, which was part of Milwaukee’s Standard Theatres chain in the 1940s. The last regular double-feature program there was on the night of Monday, December 15, 1951, with the outside temperature at fifteen below zero.

this theater is really cool,and i know fully the very personal and sentimental value it has to its owner.the theater is some what of urban history to alot of people who had the chance to hang out ,play and even had life expanding experiences inside its intriguing walls.it has inspired poety and has a nostalgic feeling for me every time i see it. im happy denise hs obtaned it because i know how hard she has fought to keep it. salu to you ms. diorio sincerely

I’d love to see some interior photos – I’ve only heard about La Vogue from older friends.

(April 10, 1941:)
Dies of Injuries from Hit-Run Crash
Milwaukeeâ€"(AP)â€" Kenneth Hagberg, 35, of Kenosha, died at the
county emergency hospital last night of injuries sustained early Tuesday when his automobile plunged off Highway 41 into a ditch near the county line.
Hagberg, who was a projectionist at the Kenosha Vogue theater, told
deputies another car sideswiped his and then fled the scene.

(January 14, 1930)
Arrest Of Man And Youths Solves Burglary Series
Kenosha, Wis.â€"(UP)â€" A series of burglaries, including that of the
Vogue theatre, Jan. 5, were believed solved today after a man and
three youths had been arrested and allegedly confessed to the robberies.
The four are Arthur Metten, 29; John Metten, 20; Christy Marko,
18, and a 14-year-old boy. John Metten was arrested in a stolen car, police said, and confessed to the thefts and admitted that he
and his companions planned to rob another Kenosha theatre, the safe
of which had already been taken out with $500 in it.

In 1940 the VOGUE’s original marquee was replaced with a streamlined art-moderne marquee (which remained until 1960), the vertical sign was removed, the interior was redecorated and “freshened”, and Nick Coston was appointed manager by lessee Standard Theatres of Milwaukee.

Also opened with Pathe news, and a Our Gang comedy(“Aesops Fables”).