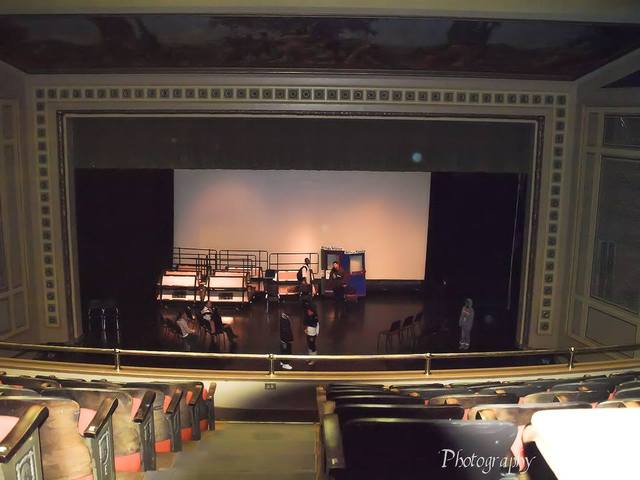 Located in downtown Kenosha and part of the Kenosha Unified School District, the auditorium was deliberately designed in movie-palace style, and is at the southeast corner of the National Register of Historic Places high school which occupies a massive block-square building constructed in 1924 and designed by Chicago based architect John D. Chubb. When built, it was called Kenosha High School; Central High School is the name engraved in its namestone. The seat standards carry the CHS logo. There are pipe-organ screens, but no pipe organ was ever installed.

The building features a Neo-Classical style auditorium of 1,400 seats with commissioned original oil paintings by Chicago artist Gustave Brandt, including a 44-foot fresco over the proscenium symbolizing Kenosha history over a century and emphasizing the arts and sciences. The 1926 school yearbook explained that the panel "shows the High School as the culmination of the ideals of such educators as Col. (Michael) Frank (considered the father of Wisconsin’s public-school system), Col. (John) McMynn (the school’s first principal) and Mrs. (Mary D.) Bradford (the former superintendent of Kenosha public schools); a high school with a curriculum varied enough to fit the needs of all classes of students and one which will place Kenosha among the first of the cities of Wisconsin in education."

Two large allegorical canvases next to the organ screens illustrate physical training and mental training, with smaller canvases along the balcony edge portraying educational subjects. The auditorium features two backlit leaded stained-glass ceilings which admit daylight over the orchestra floor and balcony. Shutters cover the ceilings for presentations requiring darkness. The auditorium acoustics are considered near-ideal and a number of recordings have been made within. John Phillip Sousa’s band appeared here on several occasions.

It was renamed Ralph J. Houghton Performance Center on May 11, 2019.

Sounds just like a high school auditorium rather than a theater. Was/is there a projection booth, for example?

The architect was John Chubb. There were indeed first-run motion pictures offered at one time, and to the present there are travelogue films offered on the first Friday of each month from September through April.

According to this website, it’s still a high school. http://reuther.kusd.edu/index.html

I attended a very large high school in Chicago that had a beautiful auditorium with a balcony and projection booth, and yes, movies were shown on occasion. I don’t think that qualifies it to be on CT any more than this one should be. The LaSalle Bank Cinema in Chicago showed movies every Saturday night in its bank auditorium. A cinema treasure? I think not.

Your exception is noted, thanks, but it’s Kenosha’s foremost performing-arts center and concert venue (though it’ll have some competition soon) and it fits every definition of a classic theatre even though it’s attached to an operating high school.

(October 15, 1955 – Racine Journal Times)
It was learned recently that a group of citizens in Kenosha have raised a fund to install an organ in the high school auditorium where the Kenosha symphony plays. The organ will be dedicated on Dec. 8 with Victor Thiex, who played here last year, as guest organist.

The theatre was renamed the Ralph J. Houghton Performance Center on May 11, 2019 during a brief ceremony followed by a free concert by the local Golden Strings, Madrigal Singers, Kenosha Alumni Band and the Tremper Wind Ensemble. During the program, a portrait by the late Kenosha artist George Pollard depicting Houghton was hung in the lobby. Houghton spent 56 years in the public school district, and for over thirty years was its music director and later director of fine arts, then assistant superintendent before retiring in 1987. He died after heart surgery in 2009. The auditorium, designed by Chicago architect John D. Chubb, was noted for its superior acoustic qualities, for which Houghton frequently fielded compliments from well-known musicians and vocalists. In the mid-1950s, when Houghton was hired as the public schools' music director, he took in a performance of the Kenosha Symphony with contralto Marian Anderson from the balcony and was astounded at how much you could hear as Marian Anderson was singing. Later, Doc Severinsen, Grammy award-winning trumpeter who fronted Johnny Carson’s house band, praised the auditorium’s acoustics. Houghton’s son recalled Severinsen telling his father “Ralph, I just gotta tell ya, I’ve played all over the country and that is the finest hall as far as acoustics and the way the sound resonates in stereo. It’s just fantastic.“ At the dedicatory concert, the final number was “The Stars and Stripes Forever,” which had special significance to Houghton, who as a U.S. Army infantry captain was captured by the Germans in 1945 during the Battle of the Bulge but later escaped his captors during the Christmas holiday, making his way across Europe toward American lines where there was a band playing "The Stars and Stripes Forever”.