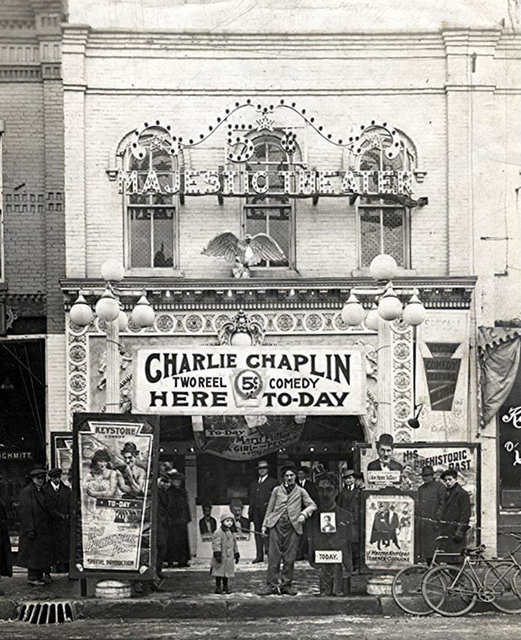 This was a very popular storefront photoplay theatre on Main Street (now Sixth Avenue), operated by well-known Kenoshan Charles Pacini who had a chain of small theatres in Kenosha including the Lincoln Theatre and Butterfly Theatre. The Majestic Theatre was his flagship theatre and the most prominent Main Street showplace until the Orpheum Theatre (II) opened one block south on March 14, 1922. The Majestic Theatre seated perhaps 300.

Interior photographs have not surfaced but there are a few photos of the exterior at the time of a Charlie Chaplin program, showing heavy use of posters and other promotional materials. Kenoshans still associate the Majestic Theatre with the mysterious and still-unsolved murder of exhibitor Charles Pacini, the story of which rivalled any of the drama ever seen on his theatre screens. In September 1923, the Majestic Theatre premiered the locally-produced itinerant film “The Belle of Kenosha”.

In 1927, facing competition from the new Kenosha Theatre, the Majestic Theatre was converted to retail space, and when the building was demolished in the mid-1960’s for a new Walgreen’s store (still there in 2005), it was housing the Badger Paint and Hardware, with most of the original façade still intact.

It was almost exactly 52 years ago when Ernst Nicolazzo walked into the Majestic Theater on Main St. in downtown Kenosha to repair 10 fans which didn’t work. The theater manager, surprised at Nicolazzo’s mechanical ability, asked him if he knew how to run a projection machine. Nick said he did. That affirmative answer started Italian-born Nick on a lifelong career. With but two major interruptions, he’s been a movie grinder ever since. Ernst Nicolazzo is the only surviving charter member of Local 361 of the projection operators' union. The union’s name is longer than most three movies put together — International Alliance of Theatrical Stage Employes and Moving Picture Machine Operators of the United States and Canada. Whew!

After being in on the formation of the local in 1913, Nick helped charter it in 1914. Recently, he was guest of honor at a dinner honoring his 50 years in the local. Nick wears a ring given to him for his 50 years of service. Nicolazzo worked at the Majestic Theater in Kenosha until 1918 when he enlisted in the Army. After a year’s duty, he returned here to work as a projectionist in the Butterfly Theater until 1923, then back to the Majestic for five more years. For 27 years, from 1923 until 1955, Nick worked at the Kenosha Theater. Then a bout with tuberculosis kept him away from theaters for 18 months. He came through this ordeal (“but did lose four ribs and a lung”, he said) and wanted to get back into the projection business. His physician recommended he not climb the 76 steps to the projection booth of the Kenosha Theater every day, so in August of 1957 Nicolazzo took a job as projectionist at the Mid City Outdoor Theater.

How long does he hope to continue in the projection business? As long as he’s able to do the job. he said. “Right now, I feel like I could go till I’m 100”, he said. “I can remember when movies cost a nickel,” Nick said. "Later the price went up to 18 cents, but a bag of popcorn was thrown in with the admission price,” he added. “People in the old days were more cost-conscious about admission prices than they are now,” Nick continued. "If the price went up, people were more likely not to come inside,” he said. Projection techniques are different today than years back, too, Nick said. "Before we had ‘talkies’, if the crowd was too big, we’d just grind the movie through a little faster. Now the movies feed through the projector at an even 90 feet per minute,” he added. Whereas breaks in film and splices were big problems for the projectionist years back, today he must worry more about electrical and sound difficulties.

There are fewer members in Local 361 today than there were back in 1914. The 25 members of 50 years ago has shrunk to about half that number today. “There used to be two projectionists for every theater, but now there’s only one,” Nick explained. Then too, such ‘homes’ for actors as the Rhode Opera House have long since disappeared.

Nicolazzo, who never married, lives with the Harvey Ewings at Paddock Lake. He drives into town twice a day, works five hours a day at his job at Mid City. One of these five hours each day is spent getting the film ready for showing. Nicolazzo likes children, and the way he treats them, it’s little wonder the opposite is true, too. He takes them to the show, buys them ice cream or other goodies, and invites them to spend weekends with him at Paddock Lake. His principal hobby is his garden. “I grow everything people say you can’t grow,” he said. Nick says his specialty is tomatoes, but he doesn’t do too bad with corn, either. “Back in 1962. my corn was 10 feet tall. I got lost in it,“ Nick said with a grin. Nick admits his interest in mechanics dates far back. He’s certainly expanded on that interest since he went to fix those fans 52 years ago.