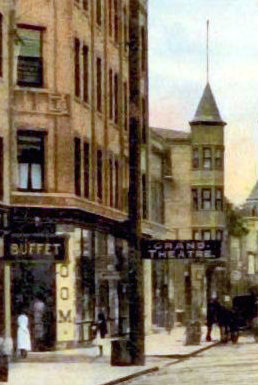 The Grand Theatre was opened December 24, 1908. It was closed in 1910, and this small early nickelodeon is forgotten today.

The GRAND Theatre in Kenosha opened on Christmas Eve of 1908 within the Meyers Block building and was owned and operated by John L. McConnell Jr. Two days later, a projection-booth fire caused two hundred patrons to evacuate into the rear alley. McConnell, who was operating the projector, said an advertising film he was threading caught fire when it touched a wire in the projector, which was also destroyed, and McConnell sustained severe right-hand burns from his attempts to extinguish the flames.

A September 23, 1910 GRAND Theatre ad in the Kenosha Evening News exclaimed that a number of studios were licensed to exhibit their product at the GRAND including Essanay, Pathe, Edison, Gaumont, Biograph, Kalem, Lubin, Selig, Melies, Eclipse and Vitagraph.

But by 1912, the Kenosha Business Directory shows the building space occupied by the Postal Telegraph Cable Company and the Conforti Brothers Tailoring Shop.

The Meyers Block itself became the TMER&L Interurban Station and the local Wisconsin Gas and Electric offices, and was destroyed by fire on February 14, 1978.

FIRE IN A THEATRE – Fire Breaks Out In New Grand Theatre During First Performance Saturday Night —– The new Grand Theatre in one of the rooms in the Meyers block on Market Square which opened for business on Thursday evening had a baptism of fire on Saturday evening when flames broke out in the little compartment in the front of the theatre used for housing the picture machine and before they had been extinguished by the department, damage to the amount of nearly a thousand dollars resulted. Fortunately there was no panic connected with the fire. The first show of the evening was just well under way when the flames broke out and there were about 200 people in the theatre. Some man saw a small line of smoke coming out of the moving picture compartment and gave the alarm of fire and the people began to stampede toward the doors, but the men in charge of the theatre showed great presence of mind and quickly opened the exits at the rear of the building and the audience managed to get out of the building without any one being injured. In the meantime the flames were burning furiously in the little compartment where the moving picture machine was in operation. John McConnell Jr., one of the managers of the theatre, was in charge of the operation of the machine. He was throwing an advertising picture on the screen and at the same time was re-winding one of the long films which had been shown earlier in the evening. A portion of the film dropped down and struck a hot wire connected with the machine and it burned like timber. The machine was supposed to be a fire proof machine, but it was burned up in the flames which followed the burning of the film. McConnell proved himself a hero on the occasion as he hurriedly shouted to the ushers to get the crowd out of the building and then attempted to smother the fire with his bare hands. In his efforts he was terribly burned on the right hand. The flesh on this hand was burned to the bone and it will be weeks before he is able to use the hand again. The flames in the little compartment were so hot that the big plate glass windows in the front of the building were cracked and considerable damage was done to the decorations of the little theatre. The picture machine is considered a complete loss as are the two large films. The loss on the machine and films is placed at $500 and there was no insurance to cover this loss. The damage to the building will probably be four hundred dollars more but this loss is covered by insurance. As a result of the fire, Chief Isermann sent out men to look over the other theatres having moving picture machines in operation. The Columbia Theatre did not open on Sunday and the machine at the Bijou was operated with a member of the fire department with a chemical on guard. Today all of the theatres are lining the rooms in which the moving picture machines are operated with tin and asbestos and there will be no great danger from this sort of fire in the future. The managers of the Grand Theatre are planning to re-open the house just as soon as the damage done by the fire can be repaired with a new machine. {Kenosha News, Kenosha, Wisconsin, 28 Dec 1908, Mon. Page 1}