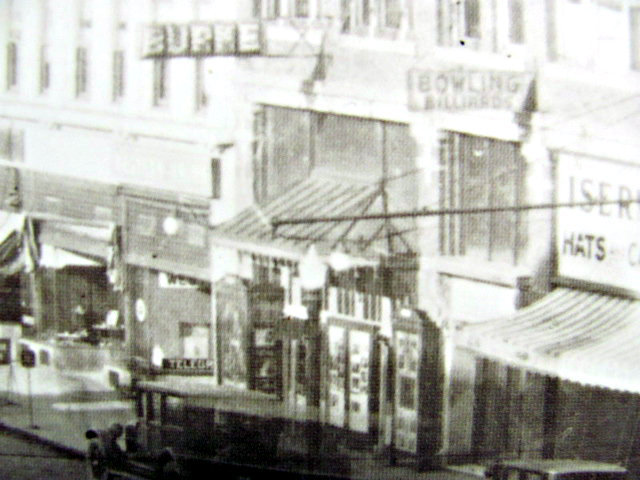 A tiny downtown showplace with a checkered on-again-off-again history. In 1915 Walter M. Burke purchased a tract of land from the adjacent Bain Wagon works and built the still-standing Burke Building (the name-stone still graces the upper floors). The narrow, low first floor was equipped for motion pictures and was named the Burke Theatre. William Meyer was the first manager. Two years or so later, Burke disposed of his interests to a theatrical firm from Joplin, Missouri, which in turn sold it to Mr. and Mrs. Charles Mantkus, who operated it for some time until Charles Collins took it over, and eventually the Kenosha Orpheum Theatre Company held the lease until the mid-1930s when Manning Silverman acquired the theatre. In 1925 a fire damaged the Burke Building, and the theatre was renamed the Cameo Theatre.

In about 1933 the Cameo Theatre was again remodeled (including the installation of sound equipment) after some years of being dark through the early Great Depression, and Don F. Cross assumed its management. In the early-1940’s, Standard Theatres took over the Cameo Theatre, and then there was a brief period when in July 1943 it was called the Ken-Gay Theatre (for the nearby Kenosha and Gateway Theatres) when it played features right out of first-run release at those two theatres. It was closed in 1945.

It became the Lathrop Appliance Store in the mid-1940s, but its triangular-shaped marquee still briefly shelters passers-by along busy 56th Street.

(August 11, 1921) Theater managers and owners of Kenosha held an important meeting on Tuesday evening in the offices of Dayton Brothers in the Dale Building and organised the Kenosha Theater Managers' association. Representatives of every theater in Kenosha were present at this meeting and became members of the new organization the purpose of which is to secure closer co-operation between the theaters on matters which require joint action. (Note: The Burke Theatre was next door to the Dale Building.)

My essay on the some of the films shown in this cinema in 1941 has now been published and can be found at:
View link

Mike, thank you for that great and most-welcome essay on Kenosha’s long-forgotten CHIEF Theatre. I’ve posted a current photo of the CHIEF (nee BURKE/CAMEO) in the Wisconsin Theatres discussion group www.onelist.com/group/WisconsinTheatres .

THIEF LIKES PICTURES OF HOLLYWOOD STARS
(November 15, 1934)
Kenosha, Wis. – An enthusiastic movie fan, who is collecting pictures of his movie stars, may be interrupted by a jail sentence if police catch him. The manager of the Cameo theater reports that almost every morning after he puts up new pictures in the display cases in front of his theater someone takes some of the photos. He asked the police to help catch the thief.

(Film Daily, May 12, 1936) The CAMEO Theater, opened recently by Standard Theater Co., and operated for several weeks as a first-run, is again dark.

The May 1, 1926, issue of Moving Picture World said that Saxe Enterprises was engaged in reconstruction of the Burke Theatre in Kenosha. The house had been destroyed the previous October, and the company had been waiting for the $26,000 insurance settlement to come through before rebuilding. The house was expected to reopen in June.

(July 21, 1943) – Announce New Policy for Chief – Chief’s Name Changed to Ken Theater and Also Inaugurates New Policy —– Francis' Schlax, manager of the Kenosha theater, announced today that a new policy had been adopted by the Chief theater for the future months — and in addition he also announced that the theater known as the Chief would undergo a change of name also. In the future it is to be known as the Ken theater. The change of policy according to Schlax is that the theater, starting this Friday and continuing each Friday, Saturday and Sunday thereafter, will show the main features which had been shown on the Kenosha or Gateway screens the first of the previous week. — Headline Attractions — As an example, Saroyan’s “The Human Comedy” starring Mickey Rooney together with “Yanks Ahoy” will open at the Ken this Friday and play through Sunday. These two films have been attracting large audiences at the Kenosha theater. In addition, next week’s showing will be “Lady of Burlesque” starring Barbara Stanwyck, which is the headliner attraction at the Kenosha starting this Friday. The new plan, according to Schlax, has been adopted to better accommodate the defense workers.