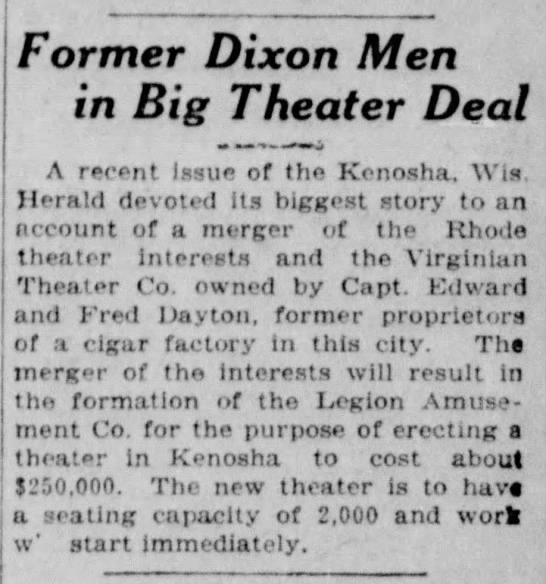 The Virginian Theatre was originally converted from existing retail space in the Young America Building and opened originally as the Bijou Theatre, a live vaudeville house that later began exhibiting silent films and selected non-theatrical events. My father said that he was in the audience during a demonstration of radio reception, the novelty of which stunned those present.

Later renamed the Princess Theatre before finally becoming the Virginian Theatre. It closed in 1922 when the nearby Orpheum Theatre opened and returned to retail space as the Leader Store, long a popular clothing and fabric shop (the small balcony held the yard goods department.) The stage is still obvious although there’s no proscenium, and also is used to display merchandise. (The Leader Store closed in the 1990’s and the building was then used as an antiques shop.)

Further research shows that the Virginian Theatre was built of frame construction in 1870 with two storefronts at street level and a hall upstairs, as was common in assembly halls of the period. At some point around 1905, a Frank O'Brien remodeled the building to combine the storefronts into a 600-seat ground-level theatre and naming the revamped showplace the Bijou, which would close its doors around early 1913. In that eight-or-so-year window, films and live acts had been featured for an admission price of 10 to 20 cents.

Within six months, the theatre was renamed the Princess and soon, ticket prices dropped to five cents, probably because of direct comptition from nearby theatres including the Majestic.

By 1915, the theatre was renamed the Virginian Theatre, and it was under the direction of Al Meis, who instituted a more aggressive show policy including live all-girl chorus lines. But as competition increased from seven nearby theatres including the ornate new 1922 Orpheum (qv) a half-block east, the Virginian Theatre closed for good at the time the Orpheum opened, and the building reverted to retail space, a role which continues today.

The added matinee, not a regular feature of the house and some of the poster work responsible for the turnout.

The Virginian Theatre, Kenosha, Wis., played to capacity for three days and in response to popular enthusiasm held the show over for a fourth, as a result of a campaign complete in every detail of modern exploitation methods.

The efficacy of the campaign may be judged from the fact that the Virginian hung out its S. R. 0. sign for the first time during the summer on the opening night of a icture that was playing its third run in the town.

The feature attraction was “The Sheik;” the campaign was carried out by Mrs. Lillian Collins, who directs the Virginian, with the assistance of R. C. Gary, Paramount exploiteer.

The campaign opened with teaser ads run for two days in the Milwaukee Journal. These read: Girls take notice Rudolph is coming! Romance will be found here next when you see Rudolph make love to Agnes. And on the second day the ads announced the play dates of “The Sheik” at the Virginian. The newspaper, which has wide distribution in Kenosha, printed a reading notice.

The Paramount exploiteer then started to concentrate on the people of the town. He obtained the privilege of posting signs on the window of a hotel on the main street. These announced that on the opening night autographed photographs of Valentino would be given free to the ladies attending.

The next inducement offered was a booklet entitled “What I Know About Women” by Rudolph Valentino. This offer was for the second night. Shortly after the posters announcing this latter gift were displayed, the theatre began receiving telephone calls for the booklet and it was estimated that over 300 requests of this nature had been received over the telephone before the evening performance. The booklets were enclosed in an envelope stamped “For Married People Only.” The booklet was about two inches square when folded. On the front cover was the title “What I Know About Women” and on the back the name of the theatre. Inside were two clean, white, blank pages. PEOPLE OF KENOSHA— GREETINGS FROM RODOLPH VALENTINO PRICES 25 & 10 WESTERN UNION TELEGRAM Hollywood Calif July 23 1922

FreeTonight 1000 booklets “What I Know About Women,” by Rodolph Valentino

We endorse this picture to be a great and unusual production and evidences the remarkable ability of Rodulph Valentino “The Screen’s Greatest Lover” and popular celebrity. Manager— VIRGINIAN THEATRE

Kenosha Folks Captured and Carried Away ASK YOUR FRIENDS — THEY SAW IT. That’s what happened to the countless hundreds who saw RODOLPH VALENTINO “The Screen’s Greatest Lover” IN “THE SHEIK” A PARAMOUNT SPECIAL.

NOTE: — This is the last time this screen sensation will be shown in Kenosha. IF YOU HAVEN’T SEEN IT — DON’T MISS IT!

“WHAT I KNOW ABOUT WOMEN” By Rodolph Valentino This Booklet Given Free to the First 1,000 Ladies Attending the Virginian Tonight ^-Come Early and Get Yours.

Two-column ads were liberally used for a week previous and during the run of the picture.

The Collins Theatrical Enterprise, owners/managers of the Burke Theatre, announced plans to lease the Virginian from the Virginian Theatre Company. The Virginian had offered vaudeville four days each week for years, and Collins said it had no plans to change the format.