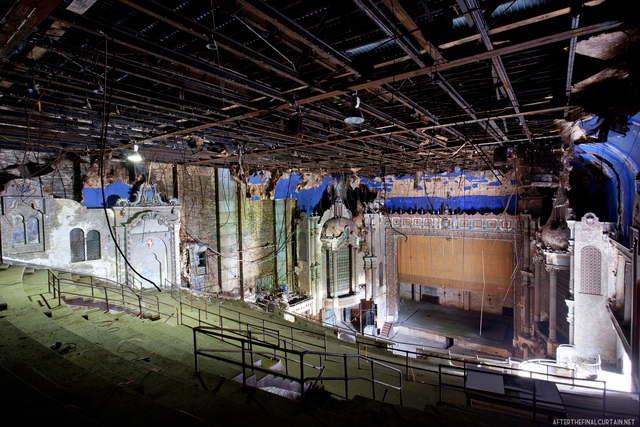 Opened September 1, 1927, the Kenosha Theatre was designed by architect Larry P. Larson and was commissioned by Carl Laemmle, the founder of Universal Studios, to be operated by the Universal Pictures chain.

A Wurltzer pipe organ, Opus 1696, with a 3 manual console was shipped to this theatre on August 8, 1927. Sometime later it was sold and went to a private individual in Glen Ellyn, Illinois. The Kenosha Theatre closed on April 21, 1963.

This theatre still stands today, but has suffered severe water damage. A new roof was placed on the building in the early-2000’s which has slowed the wear and tear of time. A non-profit group has again begun the process of fundraising to try to restore this building.

Also, I think the website for this theatre now is kenoshatheatre.org. Hard to say, kenoshatheatre.com doesn’t seem to connect to anything and the .org doesn’t look like its been updated in a very long time!

Kenosha Theatre projectionist Elmer George Hayek, 84, of Springfield, Illinois and formerly of Kenosha, WI, passed away at 5:00 p.m., November 5, 2001 at his residence. He was born June 23, 1917 in Detroit, MI, the son of George and Mary Exton Hayek. He married Alice Louise Reis in Lake Geneva, WI on August 30, 1938 and she preceded him in death in 1995. He moved to Kenosha at age 16 to work for his uncle, William “Bill” Exton at the Roosevelt Theater. Later in life, he was a motion picture operator at the Kenosha, Orpheum, Roosevelt, Gateway, and Keno theaters. He then worked as a linotype operator and foreman of the composing room at Lloyd Hollister Printing and Pioneer Press in Wilmette, IL. Mr. Hayek lived in Kenosha from 1950 until 1999 when he moved to Springfield, IL. Mr. Hayek was a member of Bristol Oaks Country Club, St. Paul’s Lutheran Church, the Veterans of Foreign Wars, and was a volunteer for the Kenosha Memorial Hospital. He had also served his country in the U.S. Army during World War II. He enjoyed playing golf and was devoted to his family. He was also preceded in death by his parents, and a brother: Albert. He is survived by a daughter: Susan (husband, Michael) Shaw of Springfield; a sister: Evelyn Willard of Mena, AR; a grandson: Scot Shaw of Cambridge, MA; and a nephew: George Hayek of El Dorado Hills, CA. Remains were cremated and Private Memorial Services will be observed at a later date. Memorial contributions may be made to the Adams Wildlife Sanctuary, 2315 Clearlake Ave., Springfield, IL 62703. (The Kirlin-Egan and Butler Funeral Home and Cremation Tribute Center, 900 S. 6th St., Springfield, IL.)

Hope something happens with this one. Seems like they were making progress six or seven years ago. It would be a shame if that was all for nothing.

(From Boxoffice, October 29, 1938:) William Exton posted $10 to be given any man over 21 years who would remain two full days and one whole night in the lobby of the Kenosha Theatre in a coffin during the two-day engagement of “Frankenstein” and “Dracula”.

I have restored/refurbished/reopened historic theatres in the past; and with proper management, no amount of money is too hard to get. They recently spent $95 MILLION, restoring the King Theatre in NYC. I own Kirk Entertainment and work with a lot of name stars; and much of the funds could be raised having them do concerts as fundraisers (reduced rates or free). I’m inquiring about the Palace Theatre in Gary Indiana and it’s in far worse condition; but, the Jackson 5 grew up there and the place is now very important. I would be willing to work with a preservation effort for the Kenosha Theatre

The Kenosha is one of the 24 theaters in my new book, “After the Final Curtain: The Fall of the American Movie Theater,” which is available on Amazon or your local bookstore

A labor dispute closed the KENOSHA Theatre from March 25 to April 15, 1932, when differences were settled at a day and night conference in Milwaukee. The employees agreed to another cut of 43%. Duke Ellington and his orchestra played the KENOSHA on May 8, 1941.

We visited the theater two days ago and saw wheel barrows and opened paint cans and brushes and ladders in the lobby. The same items we saw last year. Yet next door were fixtures with exit signs etc and chairs & table and a set of golf clubs. We thought maybe the people just walked away yet the lights and a ceiling fan were on. Does anybody know what is going on? Only a block from from the beautiful Library Park. This looks like a beautiful theater project in the making!

Whereas on May 6 the city of Kenosha will become the first city in Wisconsin where theater patrons can enjoy the advantages of the latest and most modern development in this field known as stereophonic sound,

Therefore I as city manager declare Wednesday, May 6 as “Stereophonic Three Dimension Day” in Kenosha and express best wishes to the local theater which has brought this unique entertainment experience to our citizens.