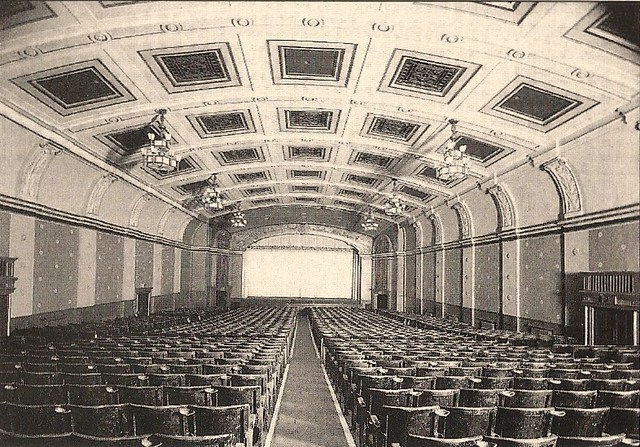 From November 1928, work began on re-construction and enlargement by theatre architect Bertie Crewe and Walter Gibbons, with interior decoration by scenic artist Andre Chaussent. Now it had 963 seats, plus standing room for 160, plus a Compton organ with 2Manuals/5Ranks was installed, with the console on a lift. It re-opened as the Globe Cinema on 29th August 1930. By 1937 it was operated by the London & District Cinemas Ltd. chain

The Globe Cinema operated under the control of Monica Cinemas Ltd. until 1951, when it was taken over by the Granada Theatre chain and it was re-named Century Cinema from 2nd July 1951.

The Century Cinema was closed on 17th October 1964 with William Holden in "The Seventh Dawn" and "UK Swings Again". The building was stripped out and converted into a Tesco supermarket, later becoming a KwikSave supermarket and in 2009 it was a Somerfield supermarket. By 2013, it was a Co-Operative supermarket

I was the 2nd Projectionist at the Century Cinema Northcote Road, in the late fifties. I remember that Granada installed the old projectors from The Granada Clapham Junction, and we were one of the first cinemas to install Zenon arcs, having the old Peerless ones removed. My Chief Operator was a Burmese fellow called Joe Pinto, and the third was a lad called Brian. I can’t remember his second name at this stage. The Century in the fifties looked far different from the illustration shown here, as it does today having been converted to a Supermarket. The fate of many of our lovely Cinemas. A final note. It was here at the Century that I met my wife Margaret, a Part Time Cashier and Usherette. We have been together for over 50 years, longer than the dear old Century lasted.

The Century Cinema was in Battersea, S.W.11. Clapham is farther south.