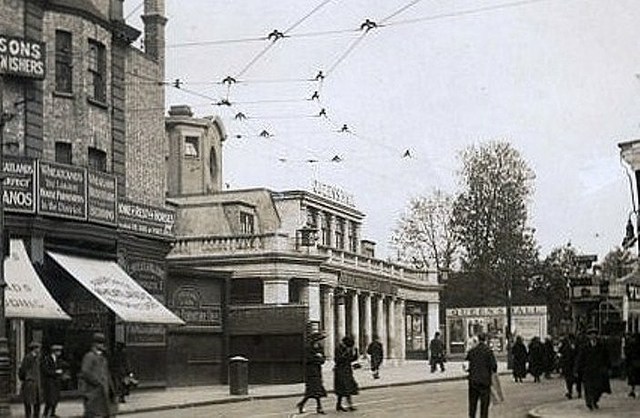 Located at 3 Cricklewood Lane in the northwest London suburb of Cricklewood. The Queen’s Hall Cinema was opened just prior to Christmas, in December 1920. It was built for and operated by the independent Catwood Cinemas Ltd. The entrance was set within a low colonnade, with shop units on each side. Seating was provided in stalls and circle levels.

It was taken over by Denman/Gaumont British Theatres from March 1928, and the cinema was refurbished, with the seating capacity reduced to 1,904. A Christie 2Manual/8Ranks organ was installed. The console was in a fixed position in the orchestra pit and it was opened by organist Leslie James.

It was re-named Gaumont in 1949, and continued with CinemaScope being fitted in 1955. The Gaumont was closed by the Rank Organisation on 18th January 1960 with John Wayne in "The Horse Soldiers" and "Lifeline".

The Cinema was demolished and a supermarket was built on the site, later a KwikSave, and in 2009 a Somerfield supermarket, by 2017 it is a Cooperative store. The Christie organ was sold for private preservation.

Not quite where shown on the map. The cinema was just to the right of the buildings on the NE corner of Cricklewood Lane and Cricklewood Broadway. I remember going to see ‘The Shaggy Dog’ (1959) there.

Andrew49:the map location has been corrected.

I went to this cinema as a child in the 1950’s and it was only known as the Queens cinema. The Gaumont State cinema was in nearby Kilburn but I never remember this being referred to as the Gaumont