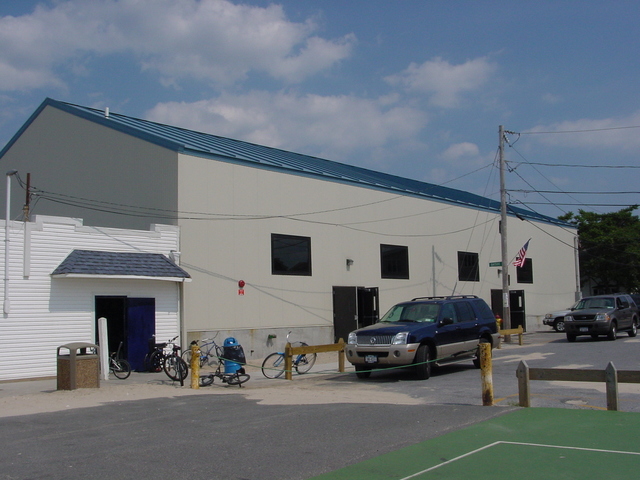 This theatre operated during the summer season only. It was constructed of corrugated sheet steel panels on a wood frame about 1929 or 1930. It had a peaked roof and was painted gray on the outside with some green trim. It was ventilated by swiveling windows up near the roof line and noisy fans. When it rained it became more noisy with the water hitting the steel panel exterior.

It was located in Rockaway Point section of Queens, next to the Colony Inn, a restaurant & bar, at the end of Reid Avenue near the boat dock for the Rockaway Point Ferry from Sheepshead Bay. By 1957 it was operated by Liggett-Florin Booking Service.

The Colony Theater was operated by my grandfather, Joseph DeMeo from the time of it’s opening near the end of the silent era until his death in the early 1970s. My grandparents had a bungalow a short walk from the theater, right on the beach, and I spent many many summer evenings up in the projection booth with Eddy Quinn, who was my grandfather’s projectionist for the entire time of operation (during the closed months, the union assigned Eddy work elsewhere). I rewound many a film, and performed numerous changeovers there. It was a great place to be. My mom, when she was growing up, would glue slap movie posters to the side of the building on the “now playing” and “coming soon” boards. Mom says the theater ran silent films when it opened (with a piano in the front), and went to sound a few years later. During the closed months, my grandfather ran an audio-visual business, “The Motion Picture Projection Service” in Brooklyn, showing educational and industrial films for clients such as The Bell System.

The building was painted green during my years and had three turbine ventilators at the peak of the roof. The screen was simply attached to the distant wall, no stage, no curtains. Seats were on a flat concrete floor. It was very sparse inside. It wasn’t meant to be a palace, nor did it pretend to be.

We have talked of going back for a visit, but the the area is a gated community (always was) and my chances of getting in there are close to nil. After 40 years, nobody probably remembers my grandfather ran the place, or perhaps that it even was a theater.

Hey Jeff: I’m glad you posted your grandfather’s theater. I’m surprised I didn’t see this sooner. I hope someone who saw movies there will add a comment soon.

Hi Jeff. I knew the DeMeo’s very well. As a matter of fact my parents had a summer house just 3 doors over on Bayside. After Joe passed, the lease for the theatre went to a Paul Ludwig and I worked for him for a few summers. I went on to get my projectionist license and join Local 306 IATSE and had a great career there. I also knew Eddie Quinn. All quiet but nice people. Thanks for the post.