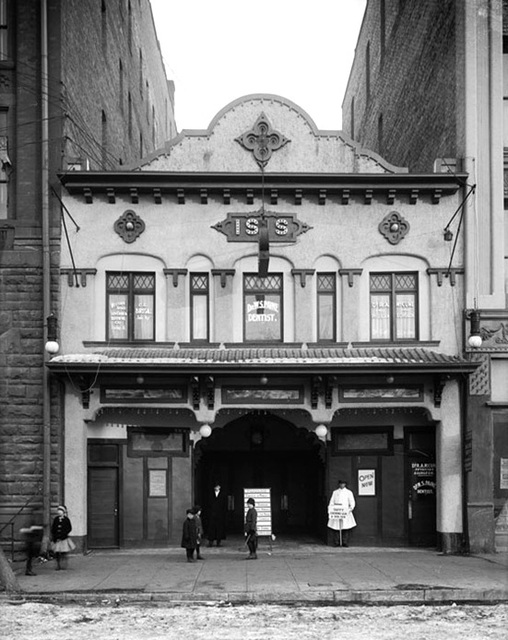 Named the Isis Theatre at its grand opening on December 22, 1908, it was located next to the Grand Opera House (which was later renamed the Orpheum Theatre). Its owner was A.J. Fyhn, who had previously managed the Broadway Theatre in Salt Lake City.

An Ogden Standard article on February 2, 1916, said that the Isis Theatre had been bought and a remodeling was planned and that it would reopen as the Utah Theatre on March 2. At this time, the other theaters in Ogden were the Orpheum Theatre, the Alhambra Theatre and the Ogden Theatre. On October 23, 1917, after a major remodeling, the Utah Theatre opened basically as a new theater.

Included was the installation of a pipe organ and a new heating and ventilating system. The major construction was the drop of the floor from back to front in order to offer better views of the screen, which had been raised. Yet another remodeling was announced in December of 1918, which gave the theater even more upgrades.

It most likely closed temporarily after December 2, 1923, when its ads were no longer in the Standard. On December 14, 1924, the future construction of a major hotel at its location was announced. Small ads for the Utah Theatre appeared again as late as January 1925 as a dime movie house but it seemed to be no longer a player with the larger houses. On November 24, 1925, the clearing of the land, where the Utah Theatre stood, began to make room for the landmark Hotel Ben Lomond, which opened at the location in 1927.

In February of 1970 movies again returned to 2510 Washington Boulevard in the form of The Movie, a small cinema, which opened in the former dinning room of the Ben Lomond. The Utah State History website has an early photo of the Isis Theatre, as well as other historic Salt Lake City and Utah theaters.