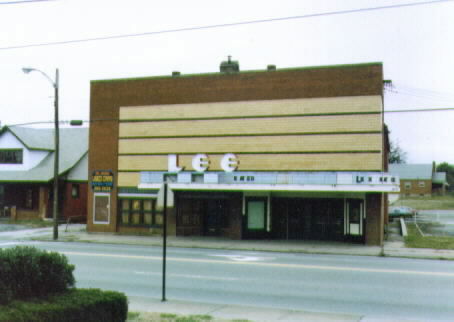 Located in a suburb of Roanoke. The Lee Theatre dates back to around 1941. Seating was provided in orchestra and a small mezannine level. There were two large murals located on the splay-walls on each side of the proscenium opening.

By the 1980’s the Lee Theatre was operating as an adult theatre. It was later converted into office space, but has since been demolished.

I mentioned this theater on another Roanoke listing years ago.The building still looks good,but was LONG ago converted to office space.Doesn’t really look like a theater,per se,unlike the Salem Theater.The one movie I remeber seeing there was the semi-grim Swedish Elvira Madigan.

“Roanoke, Va. — Dan Weinberg has opened his new Lee Theater here. House, seating 800, will use first-run pictures. Ashton Rudd is manager.”There are no buildings at the street in the 1900 block of Williamson Road in Google’s street view. It looks as though an automobile agency has taken over the entire block on both sides of the street for car lots and the Lee Theatre has been demolished.

You are looking in the wrong location on Williamson Rd. I’m sure only a handful of people will see this post, but I have attached a photo of the remodeled Lee Theatre building for those who are interested.

Have we got the wrong address, then? I’ve looked up and down several blocks of Williamson Road in Google street view (in case Google Maps is giving the wrong addresses, which it sometimes does) and I don’t see the building anywhere. The street view photo you posted doesn’t display an address, alas. Though there appears to be an address on the building itself, I can’t make it out.

This one opened on October 3, 1941 with Bette Davis in “The Little Foxes”.

The correct address of the Lee Theatre is 3162 Williamson Road, at the southeast corner of Haffen Street. The building was not demolished, but converted for offices on the ground floor with apartments on a new second floor.