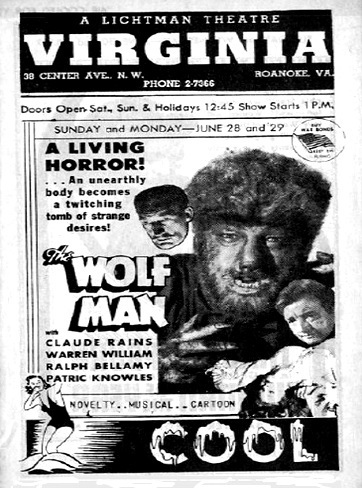 Sometimes listed at 38 Centre Avenue NW. Opened as the Virginia Theatre in the early-1930’s with seating listed at 530. In 1933 it was advertised as the only African-American movie theatre in Roanoke. Initially operated by Lichtman Theatre and later by Durkee Theatres until it closed in the late-1960’s. The building survives in 2017.

Yes I remember this theater and standing in front of it and looking it over on the outside. It was ONLY for African American patrons. The entrance may have been on Henry Street. The Academy of Music, The American, The Rialto, The Jefferson, The Grandin, The Lee and The Park did not allow African American patrons back then. The Roanoke did but only on Kirk Ave next to the American Theater stage entrance but our African American patrons had to climb many steps way up to the second balcony which was steep and you almost looked down at your shoes to see the movie or the stage show. That was nuts and finally in 1963 or 64 ALL theaters opened their main entrances to ALL people who bought a ticket, red, yellow, black or white. And the funny thing was within a week or so, it seemed it had always been that way.

The Boston Theatre is listed at this address (38 Centre Avenue NW) in a 1915 Roanoke city directory. (see photo section)

This National Register of Historic Places document states the following:

“The first black theatre, the Boston Theatre, was located at 38 Centre Avenue in 1915. This became the Hampton Theatre in 1918, with A.J. Oliver and A.F. Brooks listed in a newspaper announcement as developers. The Hampton Theatre became known as the Virginia Theatre in the 1930s and operated into the 1960s before being demolished.”

“The Strand Theatre was constructed at 109 Henry Street in 1922-1923 by Albert F. Brooks and C. Tiffany Tolliver, members of the same corporation that owned the Hampton Theatre”.

I just posted a post (in photo section) from the Roanoke Newspaper showing the Hampton Address at 39 High Street, NW.

I just posted an ad from the Roanoke Newspaper showing the address of the Virginia Theater as 109 Henry Street.

To add to the confusion, there was also a Virginian Theatre that catered to the white community

I just posted a newspaper story on the Photo Page that talks about the Virginia Theater moving from it Henry Street address to just around the corner. This could account for the multiple addresses listed in the header. The story is dated July 13, 1935

I REMEMBER WORKING AS AN USHER AND LEARNED HOW TO WORK THE PROJECTIONS AT THE VIRGINIA THEATER, THIS WAS THE HIGHLIGHT OF MY LIFE AS A TEENAGER IN ROANOKE IN 1963. THANK YOU FOR THE HISTORY. I CAME HOME AND WAS ALWAYS SORRY TO SEE THE BUILDING GONE. ARE THERE ANY PICTURES THAT SURVIVED?