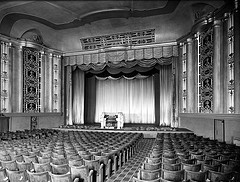 Located on Barbauld Street at the corner of Arpley Station Approach and Bridge Foot. The Ritz Cinema was built and opened by the Union Cinemas chain on 23rd August 1937 with Robert Armstrong in "Without Orders" and Chester Morris in "I Promise to Pay". On stage was Macari and His Dutch Accordian Serenaders, and organist Alex Taylor opened the Compton 3Manual/6Rank organ, which had a Melotone attached and its illuminated console was on a lift. The Ritz Cinema also had a cafe for the convenience of its patrons.

The Ritz Cinema was taken over, together with all Union Cinemas, by Associated British Cinemas(ABC) in October 1937. It was re-named ABC in 1958.

The ABC was closed on 19th August 1972 for conversion into a bingo club in the former stalls area and a 474 seat cinema in the former balcony, which opened on 7th December 1972. A small second screen seating 90, opened in the former cafe area in November 1980 which had video projection.

The cinemas closed on 23rd October 1982, followed soon after by the bingo club closing. The former bingo club became a nightclub named Mr Smiths. In June 2004, the local authority requested that due to the redevelopment of the riverfront, the Ritz Cinema should be considered for listing as an historic building, however nothing seems to have come out of this. Mr Smiths became Synergy in March 2008 when new owners took over. In late-2009 it became the Halo nightclub, and the cinemas upstairs have been incorporated in to the club. It was closed in 2010. In early-2015 plans were being prepared to renovated the building into use as a youth club.

The empty building was severely damaged by an arson fire in the early hours of 14th April 2015. Two teenage girls aged 15 & 16 and four 17 year old boys were arrested on suspected arson. The building was demolished to make it safe.

Amendment, apparently Warrington B council, can do nothing as it’s not listed.

This building has been saved http://www.insidermedia.com/insider/north-west/125595-art-deco-club-saved-demolition

A old cinema that they wanted demolished, and has now mysteriously caught fire? Wow, what are the odds?

Hmm.. There is a lot of it these days… and you cannot get insurance on an empty Cinemas and Theatres you know.

Pictures on the Warrington Guardian show the sad demolition of the entire building.

Sad. Both the Scala and Futurist cinemas in Lime Street, Liverpool will probably be demolished, although the “Picture House” sign (set in stone) will probably be incorporated into what replaces it. There is a campaign to save the facade…

“The building was demolished to make it safe.”

Projection equipment was Westar with Western Electric sound and Peerless Carbon arcs. For many years the late Dennis Cummings was the chief operator. Another operator was John Forster, who had moved from the Odeon. He went on to do relief operating for Cheshire County Cinemas. He moved to Bournemouth and retired from projection at the Odeon.

Before Westar, Simplex machines were in use. These were given to the Royal Navy in 1954.