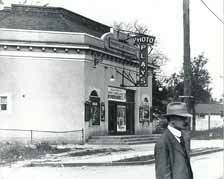 The Parkville Theatre is listed in the 1914-1915 edition of American Motion Picture Directory, with an address of 1028 Parkville Avenue. But this doesn’t map to it actual position, as it was located at the junction of Gravesend Avenue & Washington Avenue, now renamed to McDonald Avenue & Parkville Avenue.

Below is a c.1915 photo I found of this long-forgotten theater at www.brooklynpix.com. I grew up in that neighborhood and I believe that a small factory is on that site now, but can’t be sure because the photo does not indicate which corner the theater was on.

Thw Parkville Theatre was closed in 1922.

The movie being shown at the time of the photograph is “The Sporting Duchess” (1915). It is a film presumed to be lost.

DFC; Regarding your comment on Nov 23, the theatre at 990 McDonald Avenue is the Ditmas Theatre. I have just added it here: /theaters/34545/

I just updated the street view to show the correct corner (northwest). The theater was located where the red building is now.

Minor point but the Parkville should be classified as “Demolished”, not “Closed”.

The current commerical structure was built in 1959 as noted on the C of O:

Purely by chance I came upon a notice in the August 11, 1919 Brooklyn Eagle that the Beverly Amusement Corporation was building the 1,600 seat Parkville Theater at the intersection of Gravesend and Church and that there would be stores on the Church Av side. It was going to be outfitted with an organ costing approximately $ 20,000. Obviously not the same Parkville. Was a theater built on that site? Did one replace the other? Was the theater mentioned in the piece opened under another name?

This is the only Parkville Theater on CT so if the one I mentioned in my 2014 post was built it was under another name. Anybody able to check out the site or know of a way to check on what was built?

A 5-story office building is going up on this site.