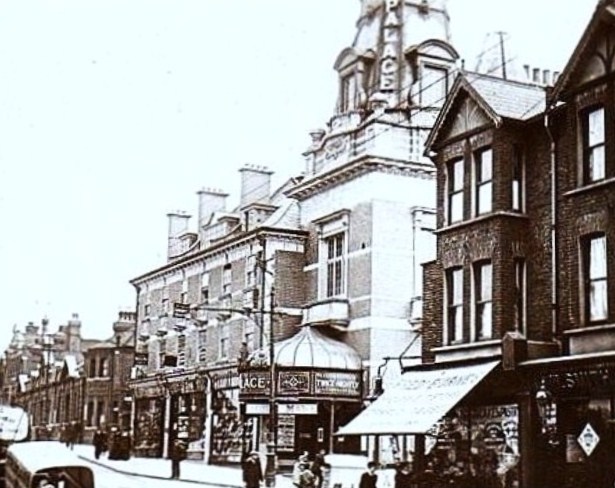 Located in the east London district of East Ham, adjacent to East Ham Railway/Tube Station. The Palace Theatre of Varieties had its entrance on the corner of High Street North and Burges Road. It opened in December 1906, and was operated by United Variety Theatres Syndicate, who also operated other ‘Palace’ theatres in Walthamstow, Tottenham, Euston and Chelsea, which were designed by the same architects.

Bioscope film shows formed part of the variety programme from the early days. In 1933, the theatre was purchased by Victor Sheridan and converted into a full time cinema, known as the New Regal Palace Cinema, which opened in September 1933. It had been equipped with a Western Electric(WE) sound system. However competition in East Ham was fierce, with several large capacity cinemas already operating and more were soon to follow. The New Regal Palace Cinema closed in December 1935, and it reverted back to live variety. Films were still played on Sunday’s, when live performances were prohibited by law.

The Regal Palace Theatre was closed in June 1956, when television was hitting the live variety theatres hard. It was demolished in 1958 and a C&A clothing store was built on the site. In 2009, the building is a Lidl supermarket.