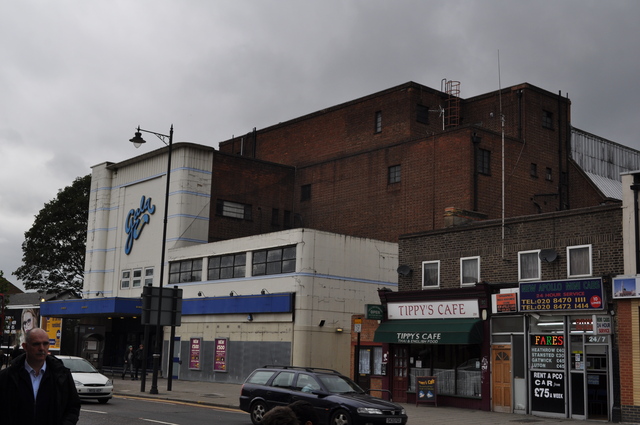 Located in the east London district of East Ham. Built on the site of the East Ham Empire of 1914 which became the Kinema in 1928, which was demolished to build this new Granada Theatre. It was going to be a new cinema for the Denman (London) circuit (part of Gaumont British) who had operated the Empire Kinema, but Granada Theatres were also interested in the site and a deal was struck for them to operate the new cinema which was designed by Gaumont’s house architect William E. Trent and the land was owned by Gaumont for many years.

It was the fourth largest Granada Theatre to open and was fully equipped to stage shows as well as films. It opened on 30th November 1936 with Sydney Howard in “Fame” and Al Jolson in “The Singing Kid”. Seating was provided in stalls and balcony and the interior decoration was by Granada Theatre’s interior designer Theodore Komisarjevsky.

It was closed by bomb damage on 29th July 1944 and remained closed for three months. The building was fully acquired by Granada in March 1965.

From 9th June 1974 it went on limited opening hours by closing on Mondays and Tuesdays and final closure as a full time cinema came on 9th November 1974 with David Essex in “That’ll Be the Day” and Marc Bolan in “Born to Boogie”.

Occasional live shows were presented and Bollywood films were shown on Sundays for just over a year, until it was converted into a Granada Bingo Club from 16th January 1976. From May 1991 it operated as a Gala Bingo Club until closing on 15th November 2014. Plans were proposed to convert it into a banquet hall. I 2017 it was converted into a trampoline fitness centre named Flipout.

On a musical note; the Granada Theatre was equipped with a ‘190 Granada Special’ Wurlitzer 3Manual/8Rank theatre organ with Grand Piano which was opened by Donald Thorne.

Vintage photographs of the Granada, and its Wurlitzer organ console:
http://www.ukwurlitzer.co.cc/2200.html

I was born in Plaistow and raised in East Ham. I now live in Dallas, Texas.

I have so many special memories of the East Ham Granada. Sometime in the early-mid 60’s, I saw Dusty Springfield, Big Dee Irwin, Freddie and The Dreamers and several other big-name artists (who I cannot remember) perform there.

We used to go round the back to Winter Avenue to watch the stars leave by the back entrance. That row of [now boarded up] upstairs dressing rooms has seen many famous artists and groups get ready for their performances.

Other than the Beatles, I know Stevie Wonder had also performed there.

Buddy Holly and The Crickets did two shows there on March 13, 1958. Also, on the bill that night … Lonnie Donegan!