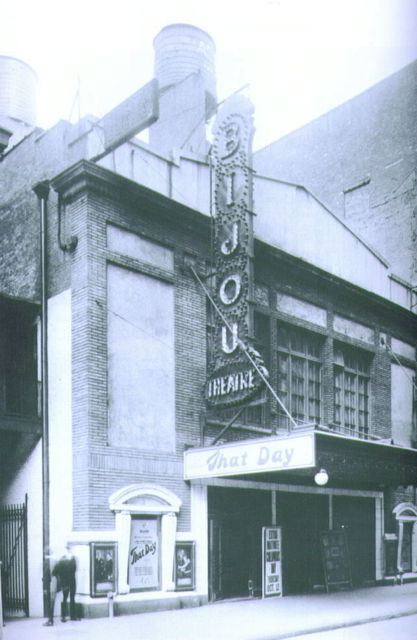 Designed in refined Louis XVI style inside, featuring an original color scheme of blue, ivory and gold in its auditorium, the Bijou Theatre was planned as the Theatre Francais, and was to have featured French stage classics, but at the last moment, that idea was scrapped, though the French-themed decor remained.

The Bijou Theatre opened on April 12, 1917 with the play “The Knife” and continued as a legitimate theatre until 1935, when it switched to an all-cartoon movie format, but only briefly, since by 1936, it had returned to legitimate theatre. In 1937, it once again was a movie house, but by the end of the same year, was closed.

It remained dark until 1943, when it once more hosted legitimate fare. From 1947-53, movies returned again, followed by another six years staging legitimate theatre.

In 1959, when the next-door Astor Theatre was being remodeled and enlarged, it required cutting into the Bijou Theatre’s auditorium and part of its stage, reducing seating to around 365.

The smaller theatre reopened on October 14, 1962 with its first name change in its history, the D.W. Griffith Theatre, which screened art films. On January 22, 1963 it was renamed Toho Theatre, and reopened with Akira Kurosawa’s “"The Bad Sleep Well” and it featured Japanese films.

First-run features returned in 1965, along with the theatre’s original Bijou Theatre name, and continued until 1970, when legitimate theatre once again made a comeback, although just as quickly, so did movies. During the early-to-mid-1970’s, both live and screen entertainment alternated every year or so at the Bijou Theatre, until 1977, when stage shows returned until the Bijou Theatre closed in 1981.

A year later, it, along with the Morosco Theatre, Astor Theatre and a couple other theaters, were all razed to clear the way for a new hotel.

A couple of European films that played the Bijou:
Magnani, in 1947
Fernandel, in 1953

Images of the Bijou can be found here;

With all of the deserved attention given to the restored print of the Red Shoes, it’s hard to imagine that at the time art films had successful runs at venues west of Broadway. Am somewhat hesitant to see Red Shoes at the Film Forum – is that theater up to the task? Would much prefer the BAM.

Came upon a theatre card for Mummenchanz at a garage sale. Had to have it as Bijou memorabilia even though, in black, white and orange (and not glossy) it’s not much to look at.

For a time this theatre was used to show TV pilots and tested with the public. I think it was the mid-60’s I went a couple of times. Only pilot I even remotely recall was some terrible comedy with Bette Davis as an interior decorator.

As I posted nine years ago (omg!), I saw Freaks here about 1970 when I was a young teenager. My girlfriend and I came in more than half-way through the film, and the movie freaked us out so much (one of us, one of us…) that we fled at intermission. It was years later that I finally had the nerve to watch it again, and it was as distrubing as I remembered it. A weird little theater perfect for such a weird little movie.

I am in the process of reading a biography about Akira Kurosawa & Toshiro Mifune & stumbled across the Toho theatre. I had no idea that a cinema that specialized in Japanese fare (and owned by a Japanese film studio) even existed. The author spends quite a bit of time in the books talking about this theatre and its sister theatre in Los Angeles. I had no idea until I logged on to this site where the Toho Theatre even was. I think there was a third theatre in Hawaii. Toho had plans to built or start a chain of theatres that specialized in Japanese films, but they never came to fruition.

Uploaded the theatre card for Mummenschanz referred to above.