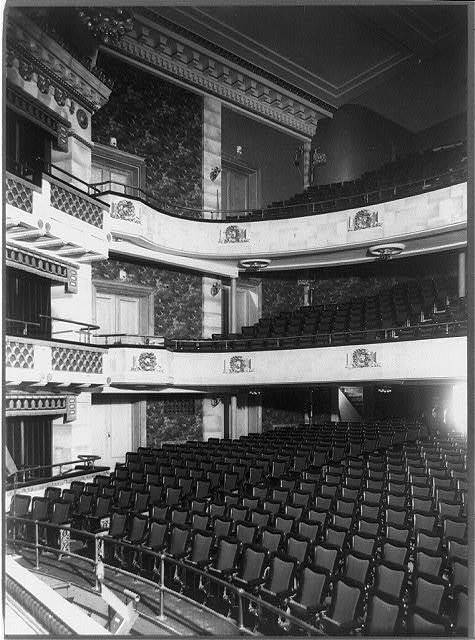 The Astor Theatre, opened on September 21, 1906 with Annie Russell starring in a production of “A Midsummer Nights Dream”. It was built and operated by producers Wagenhais and Kemper, at the corner of Broadway and W. 45th Street, seated 1,600 patrons and was considered one of Broadway’s premier venues for decades among the top actors of the era who aspired to play its stage.

Located just next to the Hotel Astor, and later surrounded by theatres like the adjoining Victoria Theatre on Broadway, and on W. 45th Street, the Morosco Theatre, Bijou Theatre and the first Helen Hayes Theatre (which opened as the Folies-Bergere, but quickly became the Fulton Theatre). The Astor Theatre was designed by George W. Keister, who decorated its interior in simple-yet-elegant Greek Revival style.

Red, gold and ivory were the original predominant colors. Outside, the five-floor building, which also contained shops and offices, was a blend of Neo-Classical and Second Empire styles, including a bronze-domed tower at the entrance at Broadway and W. 45th Street.

In 1912, Sam Harris and George M. Cohan took over the Astor Theatre, continuing legitimate fare (except for a 1913 presentation of the hit motion picture “Quo Vadis”) until 1916, when the theatre was acquired by the Shubert Bros., who would run the Astor Theatre until the Depression.

During the times when there were no legitimate bookings, motion pictures were also screened. Starting in 1925, movies replaced live entertainment on a permanent basis at the Astor Theatre, and remained so for the remainder of its existence.

By the 1940’s, the Astor Theatre was the theatre that MGM premiered its big-screen Technicolor musicals on Broadway, and remained so for over a decade. The New York premiere of Warner Bros. “East of Eden” starring James Dean was held here on March 9, 1955.

In 1959, a radical modernization of the Astor Theatre to the plans of architect John J. McNamara resulted in a dramatically stark-looking interior, with all of its original decor torn out in favor of expanded orchestra seating. Modernistic murals on its side walls and the removal of the boxes and its set of balconies, replaced by a smaller, single balcony.

The gilded proscenium arch was removed to make way for a huge curving wall-to-wall screen. The exterior was also greatly simplified and its original facade covered by a wall of marble, and given a rather plain, boxy marquee.

The Astor Theatre was closed May 30, 1972 with “Hannie Caulder”. Walter Reade Theatres said it was due to maintenance problems with the air conditioning, and not long afterwards, both it and its neighbors, the Victoria Theatre, the Helen Hayes Theatre, the Bijou Theatre and Morosco Theatre, were all earmarked for demolition to be replaced with an office tower. Plans were delayed, however, and as preservationists fought for nearly a decade to keep the theatre’s standing, the Astor Theatre’s old lobby was used for retail space.

In 1982, however, despite the valiant efforts of preservation organizations, the Astor Theatre and its four neighbors were razed to construct the Marriott Marquis New York Hotel, which contains its own legitimate theatre venue.

I am trying to ID the theater where I saw Beverly Hills Cop during the Christmas season of 1984. The theater name was Astor but it was not this Astor. It might have been named Astor Plaza and was located just off of Times Square. Since it is not listed here I assume it is listed under a different name. Can anyone here help me out? I believe it was operated by Loews.

For what it’s worth, when you write Astor Plaza in the search bar, the PlayStation theater does pop up…

in reference to da-Bunnyman’s 4/5/18 post. when Ben-Hur opened Dec. 1925 at the nearby George M. Cohan Theater during the sea battle and the chariot race they used a widescreen process called I believe Panascope.

David and Mike, thank you. That is the one. I didn’t know that you could type in an aka name and get the current name. I know that is not always the case. Maybe it is because it is still open under the newer name. I was working for Loews in Atlanta in the spring of 1975 when they twinned the theater I was managing. The previous project for the man in charge was the Astor Plaza. During the three weeks he spent in Atlanta he told me a good bit about the construction of the Astor Plaza.

Previous to this I had worked for Walter Reade at The Atlanta until they sold out to a local company and left town. I heard plenty about The Ziegfeld whenever anyone came down from New Jersey. In 1984 I finally made my first trip to NY and looked up these theaters I had heard so much about. Since I didn’t have time for two movies and since the Ziegfeld was playing Razors Edge, I opted for the Astor Plaza. I finally made it to The Ziegfeld in 2007 during that brief period when they brought back some of the classics.

Thanks again for the prompt replies. I forgot to subscribe to this page when I posted that question so I am just now getting them.

what was the last film to be advertised on the huge
horizontal sign over the Astor and Victoria theaters?