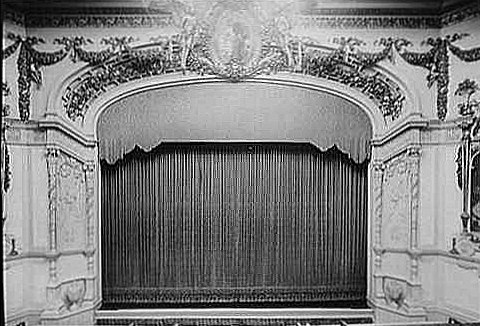 The Folies-Bergere was opened on April 27, 1911 as a theatre/restaurant based on the Parisian nightclub. Seating was provided in the orchestra level with tables & chairs, with conventional theatre seating in the balcony and second balcony levels, giving a total capacity of 636 seats. This was a short lived venture, and it reopened on October 20, 1911 as the 895-seat Fulton Theatre with the play “The Cave Man”. Films were screened at the Fulton Theatre in 1915 and 1916.

It returned to live theatre use, when in 1951 a LIFE photo labels a shot of Audrey Hepburn standing outside the Fulton Theatre in NYC when she appeared with Mel Ferrer in “Gigi” (217 performances). In November 1952 Tom Ewelll starred in “The Seven Year Itch” (1,141 performaces).

On November 21, 1955 it was renamed Helen Hayes Theatre. A production of “Mary, Mary” starring Barbara Bel Geddes in March 1961 (1,572 performances) was the last great hit to play the theatre, although in January 1968 Zoe Caldwell in “The Prime of Miss Jean Brodie” played 378 performances. Other productions followed with only minor success. The final production at the Helen Hayes Theatre was “Crucifer of Blood” a Sherlock Holmes mystery starring Paxton Whitehead and Timothy Landfield, with Glen Close also appearing. It ran for 236 performances from September 28, 1978.

The dark theatre then became a battleground to save it, and the adjacent Morosco Theatre, and Bijou Theatre, and also the Astor Theatre and Victoria Theatre both on Broadway. The battle was lost in the late-1970’s, and all five theatres were demolished in 1982 to build the Marriott Marquis New York Hotel (which contains a theatre).

The Helen Hayes (formerly Fulton), Bijou and Morrosco theatres were all demolished for the construction of a hotel. Of the three I believe only the Bijou ever screened films. The current Helen Hayes on 44th Street was formerly the Little and Winthrop Ames. It was a radio/tv studio for some years. Don’t believe there were any screenings.

This location showed films as the Fulton.

How tragic this all met the wrecking ball. Such is what is called progress. How modern! Not!