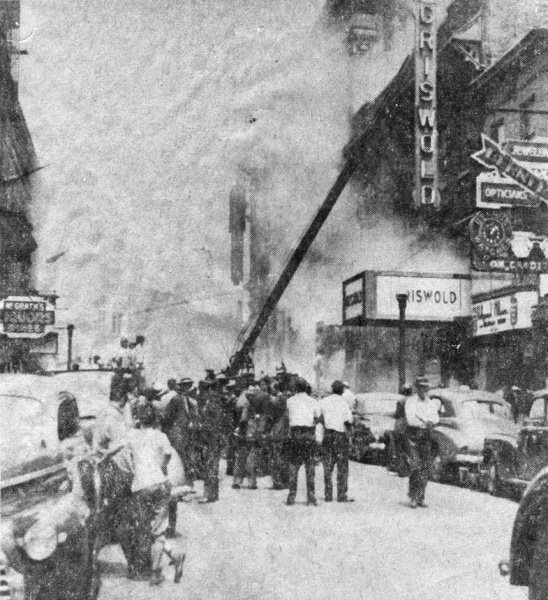 This location on 3rd Street has a long history. The Adelphi Theater was built in 1855 but burned down in 1862. A year later, Griswold Hall was built, but this burned down in April 1871. The Griswold Opera House was then built and opened on October 30, 1871.

On August 1, 1905 F.F. Proctor bought the opera house, remodeled it to seat 1,500 and called it the Griswold Theater. It was closed around 1933 and stood unused until it was remodeled and reopened by Warner Bros. on February 18, 1943. It was badly damaged by a fire on June 16, 1944. It was renovated and reopened on January 17, 1945. Local newspaper advertisements in the 1940’s called it the New Griswold Theater. The Griswold Theater was closed at the end of 1950 and was demolished in early-1951 to build a Woolworth’s store.

The last Griswold Theater burned down in the 50’s, and was demolished. A Woolworth Store replaced it, which in turn was demolished for the Uncle Sam Atrium Mall.

This is the front page of the Troy Record on June 17, 1944, reporting a blaze at the Griswold. Fire seemed to be a problem with this place.
http://tinyurl.com/m9qsyv

Warner’s had an interest in the Griswold Theatre, according to this item from Motion Picture Herald of March 6, 1943:

“C. J. Latta, zone manager, announced changes in the Warner theatre policy in Troy, N. Y., coincident with the opening of the Griswold theatre there last week. The Griswold had been dark for about 10 years until its renovation recently.

“With the Griswold in operation as a second run house, the Lincoln, previously first run, was put into a move-over policy, to take pictures directly from first run Proctor’s and Warner’s on completion of run in those houses. The Griswold’s prices represent an increase over those of the American, previously second run. The American moved up from second to first run with an increase in prices of 10 cents both matinees and evenings. The Lincoln’s price increase amounts to 15 cents for matinees and 20 cents at night.

“The Griswold, like the Troy, Lincoln and American, will be operated in a pool with Fabian’s Proctor theatre. Named as manager for the Griswold was Jack Swartout, who moves over from the American. Al Newhall, of the Regent, Elmira, is the new manager of the American.”