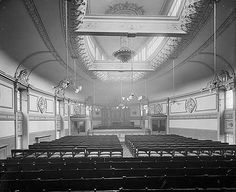 The St. George’s Hall was the small hall, located on the fourth floor on top of the Queen’s Hall building, which opened in 1893. Located on Langham Place at the north end of Regent Street, close to where the current BBC Broadcasting House headquarters are located. There was also an entrance on Great Portland Street.

The 2,548 seat Queen’s Hall was the pre-eminant concert hall in central London. Designed by well known theatre architect C.J. Phipps, one of the first film shows was held in the hall on 14th January 1896, when Birt Acres demonstrated his Kineoptican.

The 500 seat St. George’s Hall was used as a cinema in 1910-1911 and again in 1915. In 1920, Sir Ernest Shackleton appeared in person and showed film of his Imperial Trans-Antarctic Expedition. In September 1921, Rudolph Valentino in “The Four Horsemen of the Apocalypse” was screened, and again after a run at the Palace Theatre, it was screened again in November 1923. Later in the 1920’s, “The Light of Asia”(Prem Sanyas) starring Seeta Devi was screened from October 1926, and the documentary film “Simba” (another transfer from the Palace Theatre) was screened in late-October 1928. The entire building complex was destroyed by German incendary bombs on 10th May 1941.

The 4* Saint George’s Hotel now stands on the site.