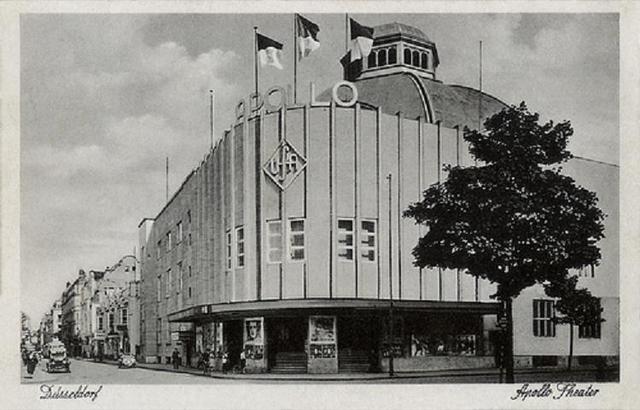 With the arrival of the Tonfilm, when sound was permanently added to the Motion Pictures, new modern theatres were built around Europe, UFA being at the forefront of doing so in Germany. Their older theaters got restyled to fit the new look, perhaps also to better accomodate large banners and displays. This one’s facade was also completely overhauled, as can be seen from several postcard pictures that exist. The ‘vintage’ exterior view above is from the restyled version. The original was very baroque, designed by architect Herrman von Endt, and opened on December 16th, 1899.
There are also strange rivots (perhaps lightbulbs?) on the vertical spokes or ribs on the picture above. Perhaps to support larger displays.
In 1942 the building was destroyed by bombing, and rebuilt in ‘48 to open again in 1950.
The Filmmuseum in DÃ¼sseldorf has a nice maquette of the theater in its later form on display.
There still is an Apollo VarietÃ©-theatre in DÃ¼sseldorf, under a freeway bridge (Apollo Platz 1), that appearently continues the original Apollo VarietÃ© tradition.

Here is a postcard view of the makeover that was carried out by the UFA circuit:
http://flickr.com/photos/pulp-o-rama/146433614/